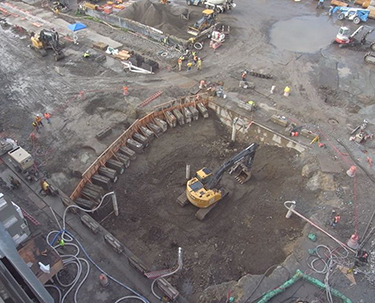 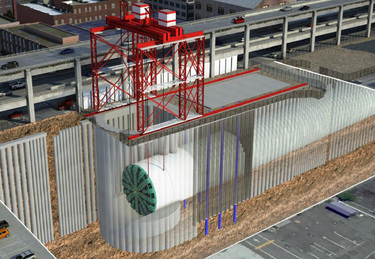 Seattle Tunnel Partners have started digging the pit that will be used to rescue Bertha, the tunnel boring machine stuck 60 feet below the surface near Pier 48.

A Deere 225D LC excavator began digging the 120-foot-deep, 80-foot-wide pit on Friday. STP says it will use more excavating equipment as work progresses. The machines will remove about 20,000 cubic yards of soil, some of it contaminated.

Contaminated soil will be hauled by truck or barge to an approved disposal site. STP will store clean soil and use it to fill the pit after tunneling resumes.

STP doesn't plan to excavate every day because other construction activities are competing for space near the pit.

Crews installed the circular pit's concrete piles over the summer.

STP will add several depressurization wells outside the pit to help balance pressure at the bottom of the pit, which is a layer of clay. One has been installed and three will be added when the excavation gets to the 40-foot mark. Engineers also will take measurements at that point.

A massive crane will be used to hoist pieces of Bertha to the surface for repair later this fall.