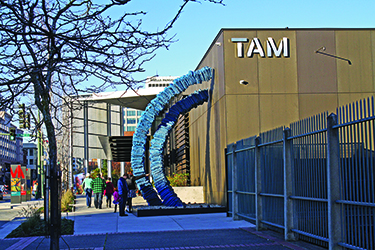 Tacoma Art Museum's new wing is open, with four galleries that have doubled the size of TAM's exhibit space.

The cafe was renovated, sheltered outdoor spaces were added and there is a new community art studio, space for a new store and an elevator that is bigger and faster.

Work on the new wing started last November, and crews turned over the space to the museum in September.

The design reflects longhouses built by the Puyallup Tribe and the region's railroading history.

The 30-foot-tall entry canopy is made of aluminum grating and stainless steel panels, some of which were re-used from the old entrance.

The exterior also has sliding screens made from a sustainable resin and recycled paper material called Richlite that is manufactured in Tacoma. The screens are 16 feet wide and 17 feet tall, and slide along a track operated by a hand crank, similar to the doors on a boxcar.

The first exhibition in the new space is “Art of the American West: The Haub Family Collection.” German supermarket billionaires Erivan and Helga Haub donated to the museum $20 million and 295 pieces of art depicting Native American life and culture.

TAM said in a press release that the Haub family spent summers in Tacoma for many years and were regular museum donors before they contributed to the expansion campaign.

The couple has been key supporters of other Tacoma projects such as University of Washington's Tacoma campus, Museum of Glass and LeMay — America's Car Museum.