RFP is due next month for Colman Dock GC/CM 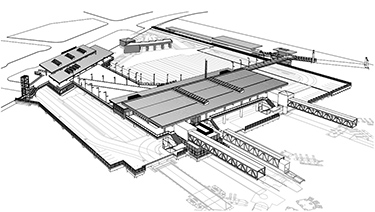 Image by NBBJ [enlarge]
Construction could start in 2017 and be done in January 2023.

The Washington State Department of Transportation will soon be looking for a general contractor/construction manager to help redevelop Colman Dock.

The agency plans to issue a request for proposals next month for pre-construction services. The contract amount is estimated to be between $100 million and $200 million.

If the state Legislature provides funding next year, then a construction contract could follow.

The project would replace the aging and seismically vulnerable components of Colman Dock.

The dock's timber trestle would be replaced and there would be a new Slip 3 vehicle-transfer span and overhead loading structures.

This image by NBBJ shows a preliminary design of the main terminal in the foreground and the entry structure.

The state estimates the project will cost $268 million. The total includes a $13 million passenger-only terminal that will be funded by King County.

WSDOT has posted a draft RFP on its website, available at 1.usa.gov/1vV858T. An informational meeting is scheduled for 1 p.m. Dec. 15 at the WSDOT Ferries Division headquarters at 2901 Third Ave. in Seattle.

Comments on the draft RFP must be submitted by 5 p.m. Dec. 19 using the form at www.surveymonkey.com/s/WVLK6DT or by mail to Genevieve Rucki, WSDOT Ferries Division, 2901 Third Ave., Seattle, WA 98101.

See the public notice in the Nov. 28 DJC for more information.

A final version of the RFP is tentatively scheduled to be advertised in the DJC Jan. 12, with proposals due on Feb. 17.

Construction is slated to start in summer 2017. The project would be built over three phases, wrapping up in January 2023.

WSDOT is negotiating an architecture and engineering services contract for the final design. That award is expected in early 2015.