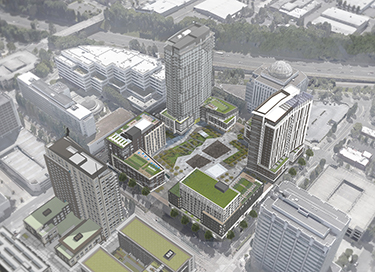 Image from GBD Architects [enlarge]
The 32-story tower in the center could be the first in Portland to use an alternative peer review process for an earthquake-resistant design that doesn’t follow state codes.

The Oregonian reports the American Assets Trust tower will be the first in the city to follow an alternative peer review process.

Developers and engineers expect to prove through computer simulations their design will hold up as well as the building code specifications.

They says the peer review process will allow for faster, less expensive construction and a more flexible interior design.

Project manager and structural engineer Josh Richards from KPFF said they are proposing a reinforced concrete shear wall core, a type that has been used in Seattle, San Francisco and Los Angeles.

Richards said typical building code specifies a moment frame or dual system (moment frames and shear walls) for buildings over 240 feet tall. He said the AAT tower will be a shear wall system without moment frames.

To prove the building is safe, AAT will use computer modeling to virtually test its seismic resilience, then run the tests and findings past city structural engineers and others hired by the city to provide a peer review. Richards said the team expects to get approval.

The city is now selecting a firm that will act as its peer reviewer. The consultants would be contracted by the city but paid from developers' fees.

Richards said a firm should be selected soon. He said three firms are in the running, but didn't know which ones.

The peer review process shouldn't add to the project schedule because it will run simultaneously with the design phase, according to Richards.

The 32-story tower is part of AAT's Oregon Square, a new development that would replace a collection of low-rise office buildings with four high-rise and mid-rise apartment buildings, with a large public plaza between them.

Construction on Oregon Square is expected to start in early 2016. The site is near Lloyd Center mall.

AAT is nearly done with another major project called Hassalo on Eighth, which is next to the Oregon Square site. Hassalo has three new buildings and a fourth building has been renovated. There is a total of 657 apartments, 50,000 square feet of retail/restaurant space, and 271,000 square feet of offices in Hassalo. Richards said it should be finished this summer.

Andy Peterson, manager for plan review and permitting at the Portland Bureau of Development Services, said the peer-review process could clear the way for other types of alternative construction, such as taller wood-framed buildings.

State and federal officials are promoting the idea of building with wood because it's cheaper and more environmentally friendly. Plus, it could be a boon for Oregon's timber industry.

But high-rise wood-framed buildings “would have to be an alternative from what's outlined in the code,” Peterson said. “Performance-based design would be the tool to get us working toward solutions.”

This story contains information from The Associated Press.