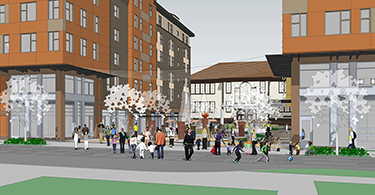 Courtesy SMR Architects [enlarge]
Rents will range between $461 and $1,220 per month.

U.S. Bank said it has invested more than $49 million in a Beacon Hill affordable housing project that is under construction.

El Centro de la Raza is developing the project, which will have 112 units at 2524 16th Ave. S., near the Beacon Hill light rail station and El Centro's headquarters.

The apartments will be rented to people making between 30 and 60 percent of area median income, with rents ranging between $461 and $1,220 per month.

The building will house space for expanding El Centro's early childhood bilingual learning center, and there will be offices, retail and two managers' units.

Construction began March 6. It is expected to open by the middle of next year.

Beacon Development Group is the development consultant, SMR Architects is designing it and Walsh Construction Co. is the general contractor.

The mixed-use complex will be named Plaza Roberto Maestas in honor of the late founder and executive director of the social services agency.

El Centro estimates the project will generate more than 150 construction, engineering and design jobs; and about 40 permanent jobs.

The nonprofit has an annual budget of $5.9 million, and about 44 programs and services.