Bids due for first phase of Burke-Gilman trail upgrades 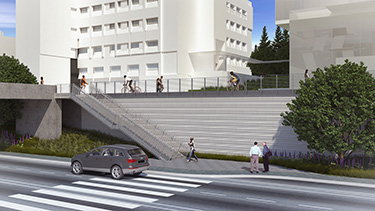 The University of Washington plans to start construction in September on a project to make 1.7 miles of the Burke-Gilman Trail safer and easier to use.

Construction bids for the first phase are due July 16. A notice in the June 22 DJC said bids are due July 15, but the UW has changed the date.

The overall project will improve the trail from Pasadena Place Northeast to Northeast 47th Street.

The total cost of the first phase is estimated to be $8.5 million. The UW has not determined what the overall project will cost.

The first phase will fix 0.3 miles from 15th Avenue Northeast to the Montlake Triangle, across from Husky Stadium. Work will include better lighting; nearly doubling the trail's width; improving connections to south campus; and fixing root upheavals and other surface flaws. Separate paths will be created for bicyclists and pedestrians.

A structural earth wall will be built under the Lewis Lane rail trestle bridge to separate the bridge from Northeast Pacific Street.

It is being rebid because earlier bids came in over budget, so the work was redesigned to reduce the scope and cost, according to KPFF Consulting Engineers, which is the structural engineer, along with Swenson Say Faget.

KPFF also is the civil engineer and did the final design for phase one, with support from Place studio. Place studio, and Alta Planning and Design developed a concept plan.

No construction date has been set for the second phase.

The UW has said Burke-Gilman is the most heavily used trail in the state. The UW segment has become increasingly popular as more people bike and walk.

New student residence halls have been built nearby, and expansions at Seattle Children's and University Village also have added to traffic on the trail.

Sound Transit's University Link and North Link light rail lines are expected to dramatically increase the number of people who use the trail.