A ‘fan deck' and more seats for CenturyLink 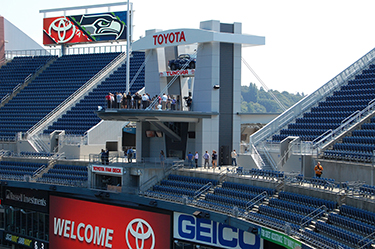 Yesterday at CenturyLink Field the Seattle Seahawks showed off 1,000 new seats and the Toyota Fan Deck, a viewing platform and gathering area for people with tickets in the new section.

The new seats are on either side of the fan deck, and bring the stadium's total seating for football games to 68,000. The Seahawks play their first preseason game tonight against the Denver Broncos.

A news release from the Seahawks says the deck will have a club-like atmosphere with multiple televisions, an 8-foot-long fireplace, and food and beverage stands. There also will be a new 12 Flag Pavilion.

Turner Construction Co. built the addition and it was designed by Crawford Architects of Kansas City.