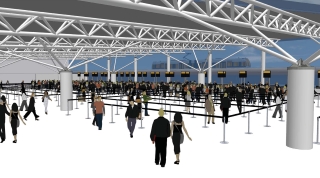 The volume of construction work that's underway and that's set to begin here in Washington will have contractors looking back someday on these being the boom times.

There are the ongoing mega-projects like the Big Bore, the Seawall and the 520 Bridge — projects that have their share of issues, but nevertheless promise to keep contractors busy for several years to come.

But the real economic driver is the unprecedented transportation and infrastructure package the governor recently signed into law. The package promises to spend $16 billion over the next 16 years. At its peak, projects around the state will be spending an average of $1.6 billion per year between 2019 and 2025.

The transportation package also allows Sound Transit to go to voters, likely by November of next year, to ask for another $15 billion to spend on mass transit. Its predecessor, ST2, was approved by voters in 2008 and had a similar level of spending: $15.4 billion over 15 years.

This time around, voters could easily remain optimistic that additional transit construction of this magnitude is necessary and worth the associated tax hikes and fees. If so, the combined $31 billion in roads and transit make it unmistakable: boom times lay immediately ahead.

But it's not all heavy civil projects that will keep contractors busy. The Washington State Convention Center recently awarded its $1.4 billion expansion project. While a portion of the project's costs will go toward things like land acquisition, the Convention Center nevertheless estimates that construction costs will exceed $800 million including contingencies.

Importantly for contractors, the project was awarded under the state's GC/CM statute. So by law, at least 70 percent of the construction work must be performed by contractors other than the GC/CM. That means contractors of all sizes will compete for well over $500 million in public works. The project has wasted no time getting started either, with EC/CM and MC/CM packages recently hitting the streets.

Sea-Tac has announced expansion plans of its own, recently awarding a “progressive” design-build contract to upgrade its International Arrivals Facility. The project's final cost will likely not be known for several months, but estimates have ranged from $470 million to over $600 million.

The project uses “progressive” design-build, which capitalizes on a 2013 amendment to Washington's design-build laws allowing award of a design-build project without knowing the proposed cost of construction. That small legislative change works wonders in this case where airlines and port officials have not reached agreement on design, price and funding sources, but agree the work must get underway.

There's also higher education. Chris Toher, executive vice president and general manager of Skanska USA Building in Seattle, enthusiastically summarizes this sector as “going great guns” before rattling off a list of current and upcoming projects for the University of Washington and Washington State University.

Toher describes Skanska as being “fairly bullish on higher education for the next three to four years” and says it's a “big market we'll continue to chase.”

So what about contractors positioned for private construction? The answer is simple: without roads and transit, there is no corporate investment, no retail, no warehouses, no housing for the influx of new employees.

“Without a doubt, transportation is critical,” Toher says.

And if infrastructure, mass transit, the Convention Center and Sea-Tac are all preparing for major increases in traffic, the expectation is private money will continue to flow into the region.

In the not-too-distant past, tower cranes had disappeared from the Seattle skyline; today they swing over private projects with purpose, oftentimes seven days a week. Whether it's office skyscrapers working their way out of the ground along Fifth Avenue, or residential towers rising above Belltown, private money has staked long-term bets here.

Despite the promise in this burgeoning economy, it's not all blue skies. Signs of inflation are everywhere — the unemployment rate being a prime example, sitting at seven-year lows. And according to the latest Mortenson Construction Cost Index, Seattle continues to outpace the national average in construction cost inflation, increasing more than 5 percent since last year alone.

All that said, oil — a major cost driver for almost all contractors — recently hit a six-year low.

Toher expresses another concern: the industry is “already starting to see capacity issues” in certain trades. And there is always a need for more skilled workers, he says.

Toher points out an additional risk: subcontractor default. Despite a thriving marketplace, the demand for subcontractors that are in short supply can drive up their risk of default when they grow too quickly or overextend themselves beyond their capabilities. But, “the disciplined subs will continue to do well,” he says.

The recent signs of a stronger economy are undeniable, but keep in mind the stock market has been on a six-year tear with S&P 500 returns touching 20 percent year-over-year since March 2009, hitting near-highs just last month. As we've all learned too many times in the last 15 years, at some point, the music ends.

As you ponder how long the party will last, consider car sales. U.S. car sales are on track this year to exceed 17 million. The last time this happened was 2006, the year housing prices peaked; the time before was 2000, the height of the dotcom bubble.

Is it different this time? Perhaps so. Unlike the last two downturns the region slogged through, this time around growth is being underwritten by public works and is not overly dependent on fleeting private investment.

With the bulkhead of so much work being firmly set in the public sector, there is assurance that the billions heading to construction contractors and the thousands of Washington families they support will remain a constant source for jobs and ultimately growth in the years to come. Boom times indeed.