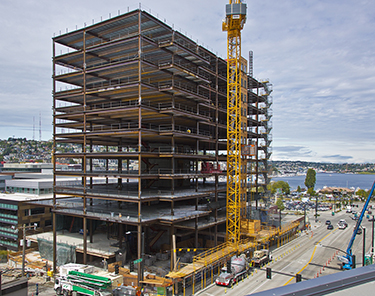 The 12-story project at 501 Fairview Ave. N. is on track to open in early 2016, with two landscaped plazas, 6,100 square feet of street-level retail and five levels of underground parking for 392 vehicles.

The glass-cube entry will lead to a two-story gathering space called The Union that will have “out-of-office” workspaces, a conference center and fitness center.

Another conference center on the roof will have wraparound decks.

A Schnitzer West spokeswoman said that there are no signed leases, but the developer is talking with multiple companies.

Oscar Oliveira and Damon McCartney of The Broderick Group are the brokers.