What's next for Bertha? 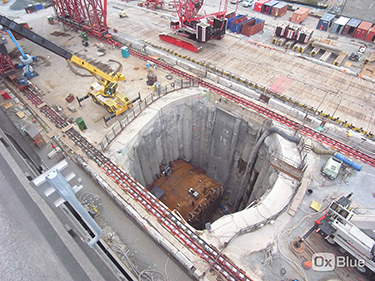 Photo from WSDOT [enlarge]
Dewatering wells will be turned off starting in November, and there could be some slight rebound in places that sunk when the pumps were turned on last year.

State officials told the Seattle City Council about what will happen next to get the broken tunneling machine Bertha going again.

On Monday, Todd Trepanier, WSDOT program administrator, said Seattle Tunnel Partners and Hitachi Zosen have replaced Bertha's main bearing and bull gear, along with the protective inner and outer bearing seals. He said they also replaced pinion gears on all 24 drive motors, the center pipe and all the cutter tools on the face.

“The outer seal is what really failed and brought the whole overheating of the machine to everyone's attention,” Trepanier said.

Crews are now hooking up hundreds of cables and hoses before testing can begin.

In the testing phase, engineers will first take measurements to make sure the machine is within specifications. Then a no-load test will be conducted that turns on switches and controls to check for proper operation.

Once the green light is given after the no-load test, STP will begin backfilling the pit to give the machine something to tunnel through.

When the pit is about half filled with soil, engineers will begin to sequentially turn off the four dewatering wells at the site.

Sowers said there could be some rebound in places that sunk after the dewatering pumps were turned on last year so that crews could dig the 120-foot-deep rescue pit. He said any ground movement should be a fraction of the original settlement, and there won't likely be any additional stress put on nearby buildings and utilities.

Sowers said it's important to have equilibrium in the soil's water content before Bertha moves out of the rescue pit in late November.

Once the pit is all backfilled, engineers will do load tests on Bertha.

If those tests are successful, the machine will mine 400 to 500 feet into Safe Haven 3, which is the last stop before mining below the viaduct.

Trepanier said Bertha should reach Safe Haven 3 in January and travel below the viaduct in February.

When Bertha goes under the viaduct, WSDOT will close the entire roadway for 10 to 14 days.

The viaduct will also be closed on the weekend of Oct. 31-Nov. 1 — before Bertha travels below it — so that WSDOT can do its semi-annual inspection.

STP's latest schedule has the tunnel opening in spring 2018, 27 months later than the original schedule.