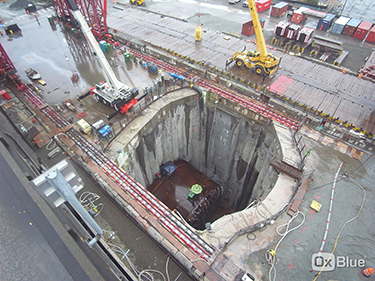 Photo from WSDOT [enlarge]
Crews are welding and hooking up hoses, wires and cables inside Bertha.

Repairs to Bertha are continuing underground after the broken tunneling machine's cutterhead and front drive unit were fixed on the surface and lowered back into the 120-foot-deep rescue shaft over the summer.

In the pit — mostly out of sight from the surface — crews are welding steel reinforcement plates and are reconnecting hoses, wires and cables inside the machine.

WSDOT asked Chris Dixon, project manager with Seattle Tunnel Partners, to recap the repair effort. The result was a four-and-a-half-minute video narrated by Dixon that can be found at http://tinyurl.com/STP-fixvid.

In the video, Dixon says that Hitachi Zosen, Bertha's manufacturer, made a new seal system that is much more accessible for future maintenance or repair. Muck got through the original seals and damaged the main bearing.

After the machine was disassembled, crews also found that the center pipe was damaged, as well as the pinions on the ends of the blue drive motors. Dixon says the pipe and pinions were replaced, and they added steel reinforcing plates to strengthen the machine and changed the configuration of the cutting tools so that the cutterhead will perform more efficiently.

Dixon says it took about 14 hours to lower the cutterhead and drive unit back into the rescue shaft after the repairs were finished.

“Once everything is reassembled, we're going to measure everything to make sure it's exactly in the place it needs to be,” he says.

If measurements are within specifications, STP will perform a no-load test on all moving parts. Crews will then backfill the rescue shaft with sand to 4 feet above Bertha and with soil above that. Dewatering wells will be turned off incrementally as the pit is backfilled.

A load test will be performed and then Bertha will slowly make its way 430 feet to Safe Haven 3, where the ground was improved with concrete columns. Crews will recheck the machine at the site.

“We have a lot of extremely talented and experienced people involved in this repair effort, so I'm looking forward to getting through this next phase and resuming the tunneling and successfully completing the tunnel drive,” Dixon says at the end of the video.

The latest schedule calls for Bertha on Nov. 23 to resume what will be a year of mining.

The schedule indicates the replacement tunnel for the Alaskan Way Viaduct will open to traffic on March 9, 2018 — more than two years behind schedule.