Everett CC gets micro apartments for students on site near campus 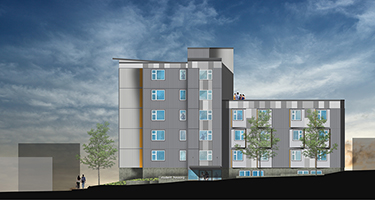 Koz Development has bought three parcels next to Everett Community College and will build 120 apartments for students.

The school recently signed a long-term lease with Snohomish-based Koz and a local investor. It will sublet the units to students.

Pat Sisneros, vice president of college services, said rents have not been set but will include all utilities and basic Internet.

The six-story building will be at 10th and Little Broadway, north of a college parking lot. Sisneros said this is considered on-campus housing although it is adjacent to campus.

The micro-efficiency units will have just over 200 square feet for a single occupant. Each unit will have a mini-kitchen and the building will have larger common kitchens and an outdoor courtyard. A resident director will live in the building.

Everett-based Kirtley-Cole Associates is demolishing three houses now on the lots and will start construction Monday.

Koz is the architect and developed the design with students' input.

Sisneros said the building will be finished in September 2016.

The college operates only one other student housing complex: Lona Vista Apartments, which has 20 units and was built in the early 1960s at 931 Broadway. Sisneros said 36 students lease the one- and two-bedroom units at Lona Vista.

Koz designs, develops and constructs urban-infill housing and student housing in markets across the country.