Andersen Construction says Oregon CLT project is on the ‘bleeding-edge' 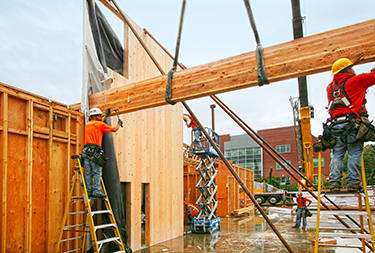 Photo from Andersen Construction [enlarge]
Crews recently placed 23 vertical cross-laminated timber panels that will form two stairwells in a building for Western Oregon University. The panels were selected for structural characteristics and to demonstrate the use of CLT.

One of the Pacific Northwest's oldest universities — Western Oregon University — is using a new construction method on its latest building.

The school chose cross-laminated timber (CLT) panels for the Richard Woodcock Education Center that Andersen Construction is building on the Monmouth campus in the Willamette Valley.

Andersen marketing manager Phil Kennedy said the two-story panels were selected both for their structural characteristics and to demonstrate the use of CLT.

Kennedy said the rest of the structure will be traditional wood-frame with concrete floors.

He said these are the first vertical CLT panels in Oregon and second CLT project in the state. CLT panels were used for a seven-section roof on the Oregon Zoo's new visitor center.

Mahlum is the architect and Equilibrium Engineers is the structural engineer. Equilibrium also was the engineer for the zoo project.

DR Johnson Lumber Co. of Riddle, Oregon, built the panels for the WOU project. Kennedy said they were the first to be made and delivered by an Oregon company, and Johnson Lumber is gearing up for more.

“The placement of the CLT panels went fantastic,” Barcroft said in a news release. “If there's a problem with a panel when it's delivered, a saw fixes it.”

Kennedy said the WOU panels are about 24 feet long, 7.5 feet wide and 7 inches thick. Each weighs about 3,330 pounds, which is about 20,000 pounds less than a concrete panel of the same size.

Kennedy said Andersen is pricing two other CLT projects for private developers in Oregon. He said the structural and seismic benefits of CLT could be significant.

Barcroft said using CLT is faster and that saves money.

“The experience was leading-edge and bleeding-edge,” he said. “We are the first to do this. What we learned will benefit all stakeholders moving forward.”

Kennedy said CLT is also gaining fans because it can be made locally, which creates jobs.

Last year, Johnson Lumber, Oregon Built and Oregon State University got $150,000 for a joint study of CLT and fast-track development of a production line at Johnson's mill.

A team led by Oregon BEST recently won a $120,000 grant from the U.S. Economic Development Administration for an interstate study about manufacturing and marketing CLT in rural Oregon and southwest Washington. The team includes OSU, Washington State University, Business Oregon and the Oregon Manufacturing Extension Partnership.

CLT has been used in Europe for two decades, but has only recently made inroads in North America.

A handful of projects in Washington have used CLT panels, including a clinic in Shoreline for International Community Health Services.