Bertha will get a spin; portals get glass walls 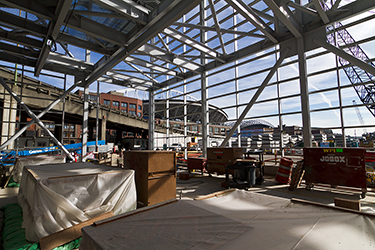 It looks like there will be light at both ends of the tunnel that replaces the Alaskan Way Viaduct.

Crews fixing the broken tunnel machine named Bertha are preparing to spin the machine's massive cutterhead later this month, and they will also install glass panels in the operations buildings that will sit at each end of the tunnel.

The spin test is one of several planned for the machine that has been disabled since December 2013. Initial tests were performed last week by Seattle Tunnel Partners and Bertha's manufacturer, Hitachi Zosen.

This week STP tested pumps inside the machine, as well as the screw conveyor system that carries excavated material from the cutterhead to the back of the machine and out of the tunnel.

Crews recently injected grout into the ground north of the rescue pit to stabilize the area where Bertha will exit the pit. Next, they will place a thin layer of sand at the bottom of the pit, then fill the rest of the pit after initial testing is finished.

While testing continues, STP will start to install glass panels in the operations buildings, beginning with the north portal.

The glass walls surround large fan rooms and will give passersby a glimpse of what goes on inside. Pedestrians also can stop at viewing areas in the plazas around both buildings.

A WSDOT news release said designers envision the buildings as “luminous bookends” at night rather than just blocks of cement. Guidelines for the buildings were developed by WSDOT and architect NBBJ in conjunction with Seattle Design Commission.

STP's latest schedule shows that Bertha will resume mining Dec. 23. The opening date of the tunnel has been pushed to April 2018.