Studio216 image [enlarge]
Bartell Drugs will occupy all of the building’s ground floor retail space. Some tenant amenities will also be on the ground floor.

Former owners of the Vitamilk Dairy got a taste of development in 2014 when they opened the 297-unit Green Lake Village project a block from Green Lake Park.

Now they're back for seconds: Vitamilk South LLC is building 130 additional apartments across the street from Green Lake Village, at 419 N.E. 71st St. The project includes a 14,600-square-foot Bartell Drugs store in its base.

The new building is expected to open in June 2017.

Both sites were home to Vitamilk Dairy for more than 60 years. Milk production ended there in 2003.

Northwestern Mutual Life Insurance Co. has equity in the project and is providing financing, according to Kevin Wallace of Wallace Properties, the project's fee developer.

Wallace said the new building was designed to complement the first phase, and will be seeking LEED silver certification.

Crews from Rafn Co., the project's general contractor, recently poured the concrete mat for the building and are now setting up forms for the first elevated garage deck. 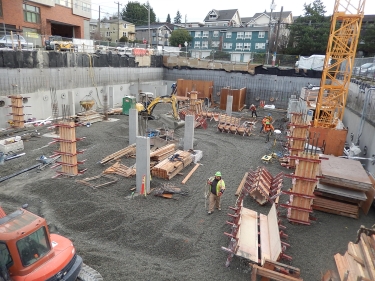 Photo from Rafn Co. [enlarge]
Crews are setting up forms for the first elevated garage deck.

There will be two levels of underground parking for 106 cars and some bicycles in the concrete garage. Wood-frame construction will be used for the five levels of apartments.

Wallace said apartments will be market rate, probably $2 to $3 per square foot. He said the project hasn't been named yet.

A rooftop deck with fire pits and barbecues will be available for tenants. There also will be a bike maintenance area and amenities for pets.

Wallace said the building will have a mid-block pedestrian crossing that connects Northeast 70th and 71st streets. He said the city allowed the project to have additional density if it had the crossing.