Renderings courtesy of WSDOT [enlarge]
The station is designed to complement Freighthouse Square, with wood siding and metal cladding. 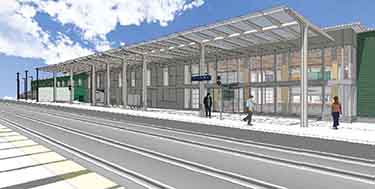 [enlarge]
One obstacle facing WSDOT is acquiring a section of the century-old structure from the owner.

Arrival of a new Amtrak station in Tacoma must stay on schedule. The station is slated to go in the century-old Freighthouse Square and if it doesn't open by summer 2017, it loses federal stimulus funding.

To keep the wheels turning, WSDOT recently put out an early notice for contractors to build the 10,000-square-foot station, which could cost up to $12.5 million. The Feb. 12 pre-bid meeting attracted 14 contractors, including a few subs.

A WSDOT spokeswoman said the goal is to seek bids by the end of March.

Contractors must be pre-qualified. More information is at http://tinyurl.com/FHS-PreQual.

One obstacle facing WSDOT is acquiring a section of Freighthouse Square from owner Brian Borgelt. The spokeswoman said WSDOT has been negotiating with Borgelt for four months, but talks stalled so last week WSDOT filed a condemnation petition in Pierce County court. A preliminary hearing is set for March 4.

If the court rules in Borgelt's favor, WSDOT will evaluate other alternatives. Short-term measures could include an unstaffed stop at Freighthouse Square's existing platform, or busing passengers from the Amtrak station a few blocks away on Puyallup Avenue.

WSDOT wants to demolish the middle section of Freighthouse Square — next to the Sounder heavy rail station — and build the new station there. The new space will connect to Freighthouse Square and has been designed to complement the exterior, with wood siding and metal panel cladding. A passenger platform with canopies would be built next to the rails.

The interior will have glu-lam beams, cross-laminated timber, and lots of wood and glass. There will be a waiting room, arcade, mezzanine and baggage room.

Since the project requires taking out a section of the building, WSDOT will install separate mechanical systems for each side in addition to the new space.

A bridge had been planned to connect with the parking garage across the street but that is now out. The spokeswoman said WSDOT hasn't resolved long-term parking options but is talking with Pierce Transit, which owns the garage.

The state has been meeting with an advisory committee for three years to design an iconic station that fits into the community, and businesses in the Dome District have been actively involved.

Parsons Brinckerhoff designed the station and platform. VIA Architecture is the architect.

The station grant is included in the $89 million Point Defiance Bypass project, which will reroute passenger trains 19.5 miles between Tacoma and the DuPont area along Interstate 5. The route now runs along the waterfront from Tacoma to DuPont. Freight trains will continue to use that route.

The bypass project includes 14.5 miles of new or upgraded track, five reconstructed crossings, three rehabbed railroad bridges and a fourth that will be reconstructed, and the 700-foot-long Tacoma Trestle platform extension next to Freighthouse Square.

Funding for the bypass is rolled into $776 million in federal grants for the whole Amtrak Cascades corridor in western Washington.

All of the projects must be finished by summer 2017 to keep the funding.

Corridor improvements are intended to shorten travel times by 10 minutes between Seattle and Portland, and increase the reliability of trains. The goal is to raise the 80 percent on-time standard to 88 percent.

On-time performance for January was 79.4 percent, according to Amtrak's website.