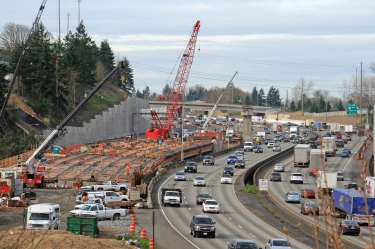 Max J. Kuney Co. is installing girders this week for the new Pacific Avenue overpass that is part of the $160.85 million HOV project on Interstate 5 between South M Street and East Portland Avenue in Tacoma.

The Pacific Avenue and East McKinley Way overpasses are being replaced to make room for a wider freeway that includes the new northbound I-5 bridge under construction in the photo.

WSDOT plans to convert the existing northbound I-5 lanes into HOV lanes in both directions. The converted lanes would cross over Interstate 705 and run between the southbound and new northbound main lines.

The overall project widens both directions of I-5 to four general-purpose lanes and one additional HOV lane from South M Street to near East L Street, about two miles. Kuney's contract is for $107.4 million.

A WSDOT spokeswoman said the goal is to finish by the end of 2017, but the new HOV lanes won't open until projects to the north are finished. She said the entire system between the King County line and 38th Street in Tacoma — including HOV connections between I-5 and state Route 16 — should be open by 2020.

The spokeswoman said there are two more projects to build out the HOV system in the area. The first is a $217.5 million design-build project that builds a third bridge in the Nalley Valley between I-5 and SR 16, and includes direct access HOV ramps in all directions and realigns I-5 approaching SR 16.

WSDOT has short-listed the firms for the first project, which is expected to start in 2017 and take three years to finish. Contenders are Skanska USA Civil West, Kiewit Infrastructure West Co. and Guy F. Atkinson Construction.

The second project involves southbound HOV lanes. Designs are being worked out and a budget hasn't been finalized. More details are expected by the end of the year.