TBM 1 has tunneled to the UW Station 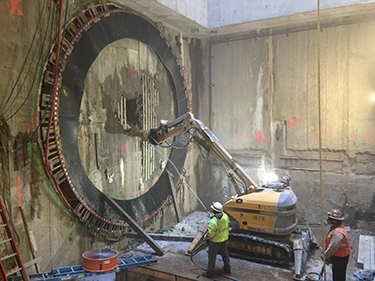 TBM #1 — the tunnel boring machine formerly known as “Brenda” — has reached University of Washington Station next to Husky Stadium.

TBM #1 and TBM #2 (formerly known as “Pamela”) are digging the twin 3.5-mile tunnels for the $1.9 billion Northgate Link Extension.

The extension will run 4.3 miles from UW Station to an elevated station near Northgate Mall. Along the way, there will be underground stations in the U District and Roosevelt neighborhoods.

Both machines will undergo inspections and JCM Northlink, Sound Transit's tunneling contractor, will determine which one to use on the final southbound segment that will connect U District Station with UW Station.

Crews will spend two or three months refurbishing the TBM that is selected for the final segment.

All TBM work is expected to finish by year end. Tunnel finishes and cross-passages, which connect the train tunnels and provide emergency exits, are scheduled to be finished in early 2018.

Northgate Link will go into operation in 2021.