Photos from WSDOT/Flickr [enlarge]
This Saccardo air nozzle was made in Tacoma at Jesse Engineering.

Big construction projects can sometimes take place sight unseen, even as you're zipping right by them.

That's the case for work on the Interstate 90 tunnels on Mercer Island. The tunnels are being prepped for the conversion of the express lanes to Sound Transit light rail lines. The 14-mile East Link is slated to begin service in 2023.

The express lanes are moving from the center of the tunnel to the outer lanes, where high-occupancy vehicles will soon be able to travel both eastbound and westbound all day. Work has been underway since early 2015 and will finish by June 2017.

The new HOV lanes will be among the most obvious changes for drivers — existing lanes will be narrowed to make room for them — but the Washington State Department of Transportation has lots of other related work on tap.

An eastbound HOV direct-access exit ramp will be built at Island Crest Way, and the tunnel safety systems will be upgraded for the first time since they were installed more than 25 years ago. The upgrades include 1,880 lights, 38 new tunnel cameras, modern fire detection and carbon monoxide systems, and 60 emergency telephones with noise-canceling technology.

It's these important safety-upgrade projects that are likely to escape your notice, since they're taking place mostly out of view.

This month, for example, crews from Imco General Construction will install a major piece of the ventilation system in the westbound tunnel. Eastbound ventilation upgrades were installed in February.

The system draws out vehicle exhaust and circulates clean air inside the tunnels. A group of intake vents east of the Aubrey Davis Park tennis courts draws air into the cavity above the tunnel ceilings. Crews will install what's called a Saccardo nozzle system, which delivers clean air from the over-ceiling cavity into the tunnel. 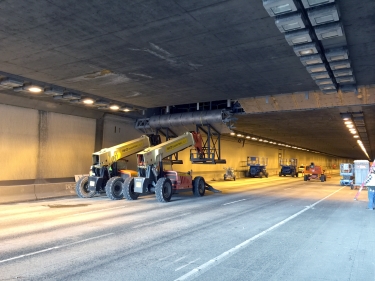 [enlarge]
Crews in February installed the nozzle above the eastbound lanes of the Mercer Island tunnel.

To perform the installation, Imco will lift large metal pieces and trusses from the roadway into the tunnel ceiling. Then crews will assemble the nozzle system inside the ceiling, out of view from drivers.

The nozzle system was fabricated by Jesse Engineering in Tacoma.

Ben Foster, an estimator and project management supervisor for Jesse Engineering, said the nozzle assembly for the westbound tunnel is around 85 feet long — longer than the eastbound assembly — and took four months to fabricate.

WSDOT scanned the surface of the tunnel and sent the data to Imco to ensure everything would fit precisely.

“Imco turned (the data) into something we could fabricate off of,” Foster said. He added that he had to be mindful of the tight tolerances inside the tunnel.

The assembly was fabricated with a mix of carbon and stainless steel. It took as many as 30 people to complete the process. The final product includes multiple pieces that will be bolted together.

“It was a very challenging project,” Foster said. Though the fabrication work was nothing out of the ordinary, it required a lot of coordination with WSDOT and Imco, he said.

The project manager at Imco could not be reached for comment.

The work is part of a three-stage, $282.6 million transit and HOV operations project that began in early 2007. Work has proceeded in fits and starts, depending on funding availability.

The second stage, which finished in 2012, was for similar work in the other direction.

The third stage, which is underway, will complete the I-90 project. In addition to HOV and life-safety upgrades in the Mercer Island tunnel, similar work is being performed in Seattle's Mount Baker tunnel.

Annie Johnson, a WSDOT spokesperson, said that parts for the existing life-safety systems are so old it's getting hard to find replacements. Technology has improved a lot, too, since the systems were installed a quarter-century ago.

“It's a big face-lift in a lot of ways,” she said of the I-90 work. “But there's not a huge amount of difference to drivers in terms of seeing changes.”