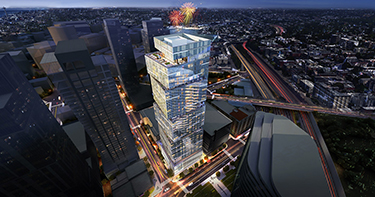 Sellers are The Benaroya Cos. and Diamond Parking.

Nexus will have 403 units ranging from one to three bedrooms.

Weber Thompson is the architect. Realogics Sotheby's International Realty is marketing the condos.

Burrard said last month it expects to break ground by the end of the year. Occupancy is set to start in 2019.

Burrard filed for a master use permit in March.

The developer will start taking reservations for the units in June and plans to begin presales this fall. Prices are likely to start in the $300,000s.

Christian Chan, executive vice president of Burrard, said in a statement last month that Nexus will be the first of “several significant projects” for Burrard in the Seattle area. Burrard's website shows other projects in British Columbia, San Francisco and Hawaii.

The unit mix at Nexus is expected to include two-level lofts as well as large penthouses. Nexus will also have retail, a co-working space, fitness center, dog run, great room, media facility and an outdoor patio.

The rooftop Sky Club will have gathering spaces such as an exhibition kitchen, private dining area, bar, recreation room, terrace with an open-air kitchen and a fireside lounge.