By JON SILVER
Journal Staff Reporter
Photo courtesy of Sky-Pix [enlarge]
Several parcels — 53,000 square feet, 6,100 square feet and 3,500 square feet — will be available for TOD projects after 2020, when the station is done. 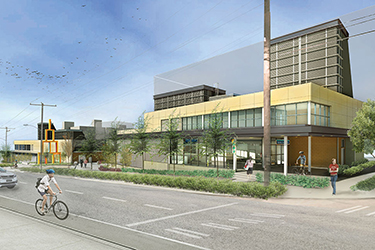 Image courtesy of Hewitt [enlarge]
Roosevelt Station will have entrances at Northeast 65th and Northeast 67 streets.

Sound Transit spokeswoman Kimberly Reason said crews are staging the large concrete segments that are being used to line the tunnels.

JCM Northlink LLC is the general contractor for the tunneling and station excavation.

The 4.3-mile, $1.9 billion Link extension will connect the station at Husky Stadium to Northgate. Service is scheduled to begin in 2021.

The Roosevelt Station is being built on the west side of 12th Avenue Northeast between Northeast 65th and Northeast 67 streets.

Another piece of work underway involves removing the muck generated by the tunneling. A conveyor system transfers the tunneling spoils through the Roosevelt Station box to the Maple Leaf portal, just east of Interstate 5 at Northeast 94th Street. From there, the spoils are taken away for offsite disposal.

Sound Transit has selected Hoffman Construction Co. to be the general contractor/construction manager for the station, though the contract has not been negotiated yet.

The agency is seeking subcontractor bids for $25 million to $35 million worth of concrete work at the station. Hoffman is competing for the contract, so it will not be managing the bidding process.

Bids are due on Wednesday. See the public notice in the Aug. 1 DJC for more details.

Hoffman is, however, seeking subcontractor bids for a different bid package that covers work related to the station structure and interiors. Those bids are due at 2 p.m. tomorrow. The public notice was first published in the June 24 DJC.

Smaller bid packages will be available after the construction contract is complete, such as for final cleaning.

Hewitt is the station architect. The design is 100 percent complete.

(Editor’s note: The article has been changed to say the design is now complete.)

Roosevelt Station will have entrances at Northeast 65th and Northeast 67 streets. Riders will be able to use stairs, escalators and elevators to reach the mezzanine level, from which they will descend to the train platform 72 feet underground.

At street level the station will also have a plaza with seating, public art and bike parking.

Sound Transit estimates the station will have 8,000 daily boardings by 2030.

R&R Studios will design the outdoor public art, and Luca Buvoli will create artwork for inside the station.

Several transit-oriented development parcels — 53,000 square feet, 6,100 square feet and 3,500 square feet — will be available after 2020, when the station has been completed. The largest parcel is currently part of the construction staging area east of Roosevelt Way Northeast between Northeast 66th and Northeast 67th streets.

According to Sound Transit, the large parcel could accommodate a building with between 220 and 300 housing units, with ground-floor retail or commercial uses.

The agency plans to issue a request for proposals for the large parcel, the site of a former QFC store, in the first quarter of 2017, following a public outreach process.

Reason said that parcel will be available before the other two properties.