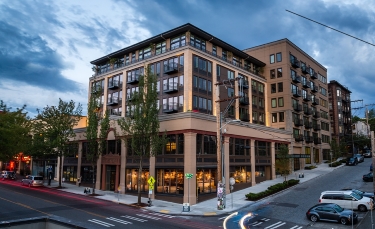 Photo courtesy of Hunters Capital [enlarge]
The facade of the 1925 Dunn Automotive Building inspired the design for a six-story structure.

Hunters Capital has completed the remodel and expansion of the Dunn Automotive Building at 501 E. Pike St. on Capitol Hill.

A press release from Hunters says the developer worked with the city to create the program that has saved the facades of a number of old buildings in the historic Pike-Pine corridor. There are about 45 pre-World War II buildings in the corridor.

The process for saving them is called a facade easement, and it allows developers to add an additional floor to their projects to help offset the cost of retaining and restoring the facade.

“While there have been other projects in the neighborhood that have used facade easement, Dunn is the first to preserve the facade of the pre-war structure at street level and create a new building atop that is designed in the same fashion of the period,” said Hunters Capital CEO Michael Malone in a statement. “This delivers a product unlike any on the market today, one that — from top to bottom — celebrates Seattle's history while providing for its future with new space.”

Hunters built a six-story structure on the site, replicating the facade's sandstone and the pattern of the original windows. Shadow boxing was added as an accent.

The new space steps back 15 feet from two sides of the facade, which was a requirement of the facade easement rules.

By using the facade rules, Hunters said it was able to turn the 20,000-square-foot Dunn Building into 100,000 square feet of mixed-use space, which is proving to be popular.

Apartments are 98 percent leased. Office space is occupied by Avenue A Properties and Critigen LLC, and Tavolata Capitol Hill restaurant and Bassline Fitness are the retail tenants.

The project team was led by Studio Meng Strazzara, W.G. Clark Construction and DCI Engineers. Greg Quist was the design consultant for the residential lobby, Jon Calvo was exterior color specialist and Historic Seattle helped with the facade.

Hunters Capital says the facade easement process has saved portions of at least 10 historic buildings in the Pike-Pike corridor.