Tower 12 tops out in Belltown 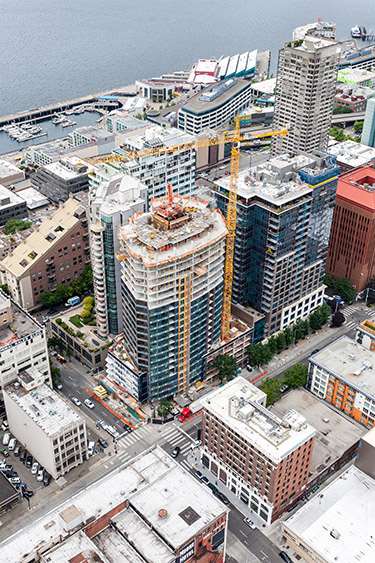 The 34-story tower has two concrete cores supporting post-tensioned decks. In addition to apartments, the 492,000-square-foot tower will have three levels of amenity spaces, ground-level retail, and parking for 312 cars in five below-grade and four above-grade levels.

Most units are one bedroom, but there will be 53 two-bedrooms and 12 penthouses. The average size of standard units is 825 square feet. Penthouses will average 1,476 square feet.

On the top floor will be a lounge, library, game room, gym and outdoor terrace overlooking Puget Sound, with barbecues and seating.

PCL Construction Services said the project is one month ahead of schedule and should open in May 2017.

The general contractor also said its team has logged more than 500 days of work — more than 240,000 worker hours — without a recordable incident.

The project is expected to have a LEED silver rating.