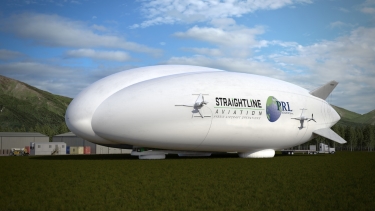 KENAI, Alaska (AP) — New football field-sized airships are set to arrive in Kenai as part of an Alaska company's plan to boost transport to construction sites in remote areas of the state.

The hybrid airships from Lockheed Martin are expected to be housed at PRL Logistics' 60-acre facility in Kenai by 2019, The Peninsula Clarion reported.

The egg-shaped aircraft can land on snow, ice, gravel and water and has space for 47,000 pounds of cargo and 18 passengers. About 80 percent of its lift is generated by its helium-filled envelope, while the rest comes from the forward motion of its aerodynamic shape.

“The goal here with this aircraft is to create an opportunity for companies to do projects they may not have been able to do because of the expense of logistics, infrastructure and current transportation methods,” Hyde said. “We hope it will be something that can bring business to Alaska, that can help projects that don't have deep pockets get into some remote areas.”

Some of those projects could include oil and mining exploration, the cleanup of old military sites or disaster-relief situations in Alaska's villages, Hyde said.

PRL will use the aircraft under a partnership with UK-based Straightline Aviation, which became the first purchaser of the LMH-1 when it bought a dozen airships from Lockheed Martin in March for $480 million. Hyde said PRL will use all 12 airships, with some being deployed to other jobs in Canada, Africa and the Middle East. The Kenai-based aircraft will be the first in operation.