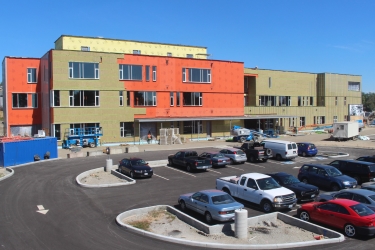 The old Wilson-Pacific School in Seattle's Licton Springs neighborhood is now a memory as its replacement takes shape at 1330 N. 90th St.

Lydig Construction is installing exterior fiber cement siding and glazing on the new Robert Eagle Staff Middle School, one of two replacement schools for Wilson-Pacific that Lydig is building for Seattle Public Schools. The other is Cascadia Elementary.

Cascadia will be 91,000 square feet and will front North 90th Street and Wallingford Avenue North. It will handle up to 660 students in the district's Highly Capable Cohort program, which is now at the former Lincoln High School.

Robert Eagle Staff will be 140,000 square feet and will front 90th and Stone Way North. It will handle up to 850 middle school students plus 150 students from the Licton Springs K-8 program, which is also temporarily at Lincoln.

Existing playfields will be relocated and shared by the schools.

The seven buildings dating to the 1950s that made up Wilson-Pacific were removed to make way for construction. But not all was lost: several American Indian murals by artist Andrew Morrison were detached from the old school and will be reinstalled onto walls in both new schools.

Mahlum Architects is the designer and Shiels Obletz Johnsen is the construction management firm.