1,260-room hotel in Hedreen complex will be Hyatt Regency 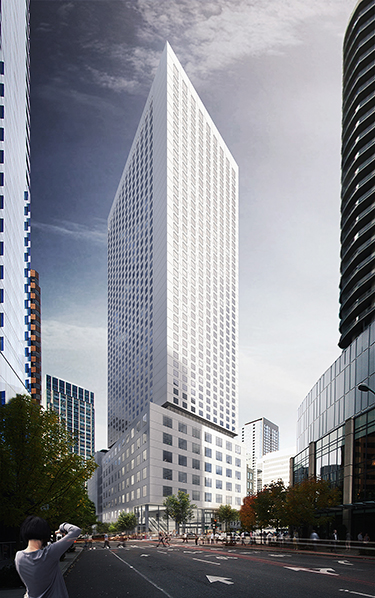 Rendering courtesy of LMN Architects [enlarge]
The hotel is under construction at 808 Howell St.

The 45-story complex R.C. Hedreen Co. expects to open in mid-2018 two blocks from the Washington State Convention Center will have a 1,260-room Hyatt Regency hotel.

A Hyatt affiliate entered into a management agreement with Seattle-based Hedreen to operate Hyatt Regency Seattle, which is under construction at 808 Howell St.

Hyatt Hotels Corp. and Hedreen announced the deal in a press release on Wednesday. They said this will be the largest hotel in the Pacific Northwest.

The first two floors will house the lobby as well as space for restaurants, bars and a marketplace. Floors three through seven will have 105,000 square feet of meeting and event space — including two 19,000-square-foot ballrooms. Floor eight will have a fitness center and the Regency Club lounge. Hotel rooms will be above that.

LMN Architects designed the project and Sellen Construction Co. is the construction manager.

Richard C. Hedreen, chairman of R.C. Hedreen Co., said he believes the global brand will appeal to the growing base of business and leisure travelers visiting Seattle.

David Tarr of Chicago-based Hyatt Hotels Corp. said this hotel will help the company grow in gateway destinations “where our guests want us to be.”

The hotel will be two blocks from the existing convention center and adjacent to the center's proposed $1.6 billion expansion, “making Hyatt Regency Seattle an ideal base for convention attendees,” the companies said.

The estimated cost for the Hedreen complex is $400 million, according to a list compiled by the Puget Sound Business Journal.

Original plans for the project called for a 40-story hotel with 1,680 guest rooms, and a second tower with 152 low-income apartments over a shared podium.

Hedreen needed an alley vacation from the city to build the full-block project, but failed to get support for the plan from some city councilmembers, so it opted for the smaller project that covers about three quarters of a block.

R.C. Hedreen Co. and its affiliates have developed, owned and managed investment properties since 1963. In the release, the company said its portfolio includes hotel, retail, high-rise office, and single- and multi-family housing. The company owns Grand Hyatt Seattle and Hyatt at Olive 8, also downtown.

Hyatt Hotels Corp. is a hospitality company with a portfolio of 12 brands and 667 properties in 54 countries. There are over 168 Hyatt Regency locations in over 30 countries.