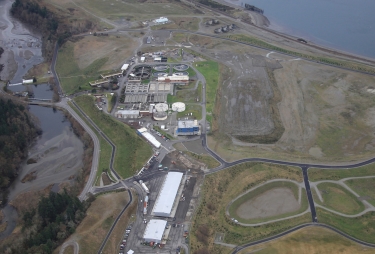 Photos by Kemer Nelson/Aequalis Photography [enlarge]
BEFORE: The plant occupied 49 acres and could process 29 million gallons of wastewater daily. 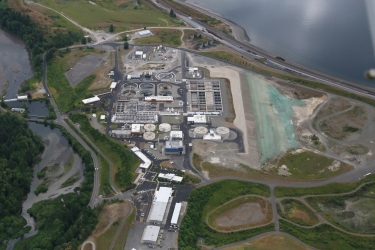 [enlarge]
AFTER: The plant now covers 89 acres and can handle 44 million gallons of wastewater.

Pierce County has flipped the switch on its $342 million expansion of the Chambers Creek Regional Wastewater Treatment Plant in the city of University Place. The project was finished last month and was $11 million under budget.

“This project will allow the county to grow while keeping our sewer rates as some of the lowest in the region,” said Pierce County Planning and Public Works Director Dennis Hanberg in a news release.

All components of the plant — some that date to the early 1980s — were enhanced or upgraded to increase capacity by 50 percent, to 44 million gallons per day. Users currently generate about 20 million gallons of wastewater daily.

The footprint of the plant was nearly doubled, from 49 acres to 89 acres, and its improved processing capabilities reduce nitrogen in the water discharged into Puget Sound. Byproducts known as biosolids are refined into dry pellets and sold as SoundGRO fertilizer to local and commercial customers.

Brown and Caldwell, the lead designer for the expansion, specified a relatively new technology developed at the University of Innsbruck in Austria called Demon. This technology uses naturally occurring bacteria to remove ammonia from wastewater with minimal energy input.

Demon enabled the county to reduce the size of the biological treatment system by 20 percent and cut chemical and oxygen demands by 50 percent and 25 percent, respectively.

Earlier this year, Brown and Caldwell received national recognition for the project from the American Council of Engineering Companies.

Ground work for the project began in 2010 and construction started in 2013. Substantial completion was reached May 15, about two months behind schedule. Minor construction work will likely continue through early 2018.

About 350 trade workers and four tower cranes were on-site at peak work periods.

Some of the work took place during the 2015 U.S. Open golf tournament at the adjacent Chambers Bay course. To accommodate that event, work was coordinated around a two-month window with no visible construction, limited traffic access and no off-site impacts. The tournament drew 30,000 daily visitors.

Most of the project‘s funding came from three sales of 30-year bonds. The state Department of Ecology provided a $60 million loan. Other funds are coming from connection charges for new developments, state grants and customers' monthly sewer bills.

Video from a drone flyover at the finished plant can be viewed at http://tinyurl.com/PCWWTP.

Pierce County's sewer system collects wastewater from a 117-square-mile area with a population of 294,000 people in the cities of University Place, Lakewood, DuPont, Steilacoom and part of Tacoma. It also serves the unincorporated communities of Parkland, Spanaway, Midland, South Hill and Frederickson.