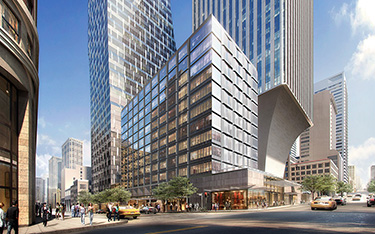 Rendering by NBBJ [enlarge]
The new 58-story tower will have 1.17 million square feet, including office space, 200 apartments and about 80,000 square feet of retail.

Wright Runstad & Co. has announced that Amazon will lease all 722,000 square feet of office space in the 58-story Rainier Square tower it is planning at 1301 Fifth Ave.

Work is expected to start soon on the tower, which will have 1.17 million square feet, including office space, 200 apartments and about 80,000 square feet of retail.

The tower is taking the name of the old low-rise retail buildings on the block that will be removed to make way for the new tower and a smaller companion hotel.

Demolition has begun on the site, and Wright Runstad says excavation will last until mid-2018. The tower should top out in mid-2019 and be ready for occupancy in the summer of 2020. The apartments are scheduled to open after that.

Rainier Square is bounded by Fourth and Fifth avenues, and Union and University streets. It is part of the University of Washington's 10-acre Metropolitan Tract. Wright Runstad has an 80-year ground lease with the UW for the property.

In a statement, Jon Runstad said, “The significance of Rainier Square to the city cannot be overstated. The project's striking design and mix of uses will give new focus, energy and excitement to what has always been the strategic center to our downtown core. We are very proud to be a part of it and thrilled to achieve this critical milestone.”

Amazon did not issue a press release. Even as the company searches for a second headquarters city for what it calls HQ2, Rainier Square will add significantly to the roughly eight million square feet it now occupies in Seattle and Bellevue. Amazon's local footprint is expected to grow to around 12 million square feet, and HQ2 will be in addition to that.

Wright Runstad and J.P. Morgan's client will invest $570 million in the Rainier Square redevelopment. Eastdil Secured and Holliday Fenoglio Fowler are financial advisors on the project.

About $7.5 million of the budget are fees paid to the city to create affordable housing.

The retail will include an Equinox gym and a 20,000-square-foot organic food market.

A 12-story hotel is also planned for the second phase of Rainier Square's expansion, with the Related Companies of New York as a development partner.

Seven levels of underground parking will accommodate over 1,000 vehicles.

The apartments, on floors 41 through 58, will be developed with advisory services by Full Scale, a division of The Schuster Group.

The original 41-story Rainier Tower — designed by Seattle native Minoru Yamasaki, architect of the World Trade Center — will not be affected. It was completed in 1977, and has about 540,000 square feet above its famously tapered, 11-story, wineglass-stem-base.

The new tower will be on the north side of Rainier Tower, facing Union. The 163-room hotel will be on the southwest corner of the block, at Fourth and University, where the Mephisto shoe store and U.S. Bank used to be.

No schedule has been announced for the hotel.