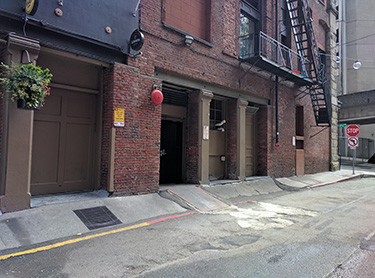 Photo by Jon Silver [enlarge]
The old timber-pile bridge affected the road surface and caused the sidewalk to slope. 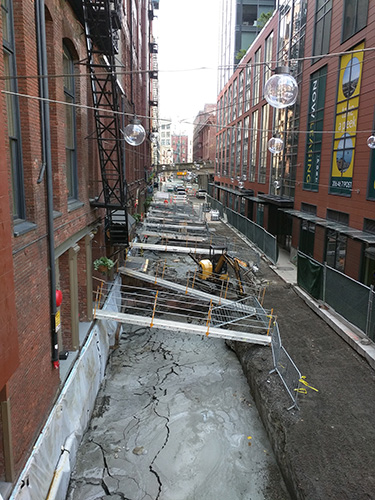 The city of Seattle is finishing a $1.52 million project — and replacing a curious piece of its past.

Crews from Imco Construction removed the 127-year-old Post Avenue Bridge between Columbia and Marion streets, that was built over what had once been the Elliott Bay waterfront. The timber-pile bridge had been sinking for years, affecting the road surface and causing the sidewalk to slope awkwardly.

So now you may be asking, “Wait, what timber-pile bridge?”

The 240-foot-long structure was buried under concrete and asphalt, below what's now Post Avenue. It was one of the last remaining structures of its kind in Seattle.

Early in the city's history, Front Street (now First Avenue) stood roughly one story above the central waterfront, atop a timber retaining wall. As tidelands to the west were filled in — creating the shoreline contours we have today — the land was developed and new streets were constructed.

Post Street, as it was called then, was built in 1890 amid a spate of construction that followed the Great Fire of 1889. Between Columbia and Marion, Post was constructed as a wood-planked street atop wood trestles and pilings, in what was still a tidal area.

A 2016 consultant's report commissioned by the Seattle Department of Transportation provided the historical details.

Wood trestles on surrounding streets were already getting replaced at the turn of the 20th century. Trestles, it turned out, were a haven for rodents and considered a health and sanitation nuisance.

But the upgrades took place at a time when the Colman properties on either side of Post between Columbia and Marion were being remodeled. The Colmans, it's believed, may have resisted the city's inconveniently timed efforts to repave that stretch of Post.

In any case, the street was finally paved with creosoted wood blocks in 1911, followed by a couple of inches of asphalt in 1945. But the bridge underneath remained.

Over the years, fill under the bridge settled, leaving a 2- to 3-foot gap below the bridge. The city started monitoring the street for settling in the 1990s.

The bridge structure itself is not considered historically significant because it has been altered over time. Archaeologists monitored the site during construction to document the structure and look for buried artifacts.

A spokewoman for SDOT didn't say whether the archaeologists uncovered anything important, but noted they're preparing a report that will be archived with the state.

After removing the entire structure, crews replaced the soil underneath with a low-density fill material, followed by 6 inches of compacted aggregate. 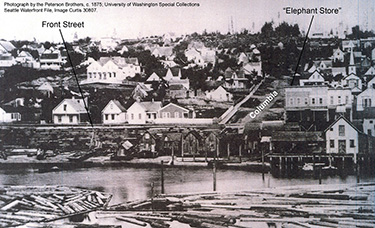 Photo by the Peterson Bros./UW Special Collections [enlarge]
Post was built in 1890. Between Columbia and Marion, the wood-planked street sat on wood trestles and pilings, which eventually rotted and began to sink.

The low-density fill — a cellular concrete — was used to avoid putting pressure on the foundation of the historic Colman Building. A polyethylene foam bond breaker will provide a barrier between the building and the cellular concrete.

Crews are now building the new roadway and sidewalk.

The sidewalk is for the east side the street, adjacent to the Colman Building, in front of several businesses, including Owl N' Thistle Irish Pub and The Good Coffee Co.

The new sidewalk will be wider than before, and the street will be narrowed from 30 to 25 feet. The sidewalk on the west side was replaced in 2012 when The Post apartments were built.

Construction briefly slowed when a privately owned fire-suppression line serving the Colman Building was uncovered. The city agreed to pay to encase and bury the line in return for a release of damages related to the work.

The four-month project started in October and is expected to finish in mid- to late January. The opening date for the street will depend on the availability of concrete and cooperation from the weather.