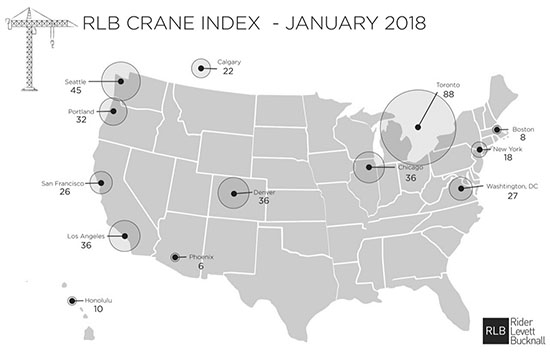 Rider Levett Bucknall's semi-annual construction crane count will show a big drop in the number of cranes at work in Seattle.

The RLB Crane Index, to be released next week, will show Seattle lost 13 cranes over the past six months that ended in November, reducing its total to 45 cranes. Despite the 22 percent drop, Seattle still leads the 11 U.S. cities tracked.

“We were a little surprised by the number,” said Jake Witt, RLB marketing and business development coordinator in the Seattle office.

Witt said it was the first time since 2015 that the number of cranes have dropped below 50 in Seattle. He said the count is a snapshot in time, so it is sometimes skewed by projects that are just starting or finishing. In this case, Witt said RLB saw quite a few sites that were getting ready for cranes, including one in West Seattle, that will likely be part of the next count in May.

Witt said RLB expects the next count to go up, based on those causal observations.

Cranes in Seattle are working on the same types of projects as in the past few years: high-tech offices, apartments and development around transit corridors. Mixed-use projects comprise a third of the count. Other active areas are education, commercial, hospitality and transportation.

Witt said even a few condo projects are starting to show up.

Neighborhoods with the most development are South Lake Union, Capitol Hill and the University District, though Witt noted that South Lake Union isn't quite as robust as it has been.

That begs the question: Has the market peaked here?

Witt said he was at a Bisnow presentation this week where the panel was still very bullish on Seattle.

And RLB's local office is busy consulting on a number projects, including several multi-use towers for foreign developers and investors. Witt said interest is coming from Asia, Australia and Canada.

“Seattle is definitely on the world radar for investment,” he said.

Los Angeles, Denver and Chicago were tied for second in the index, with 36 cranes each. Portland was a close third, with 32 cranes.

Portland's crane count was flat over the past six months.

Kim Craigie, RLB regional marketing manager in Portland, said cranes being taken down were subsequently going up at other sites in the city.

Many of Portland's cranes can be found in the northwest sector of the city, which includes the trendy Pearl District.

Roy said the outlook for Portland is healthy because more infrastructure work is expected to start over the next few years, as well as a significant number of higher education and K-12 projects on the heels of new bond levies passing.