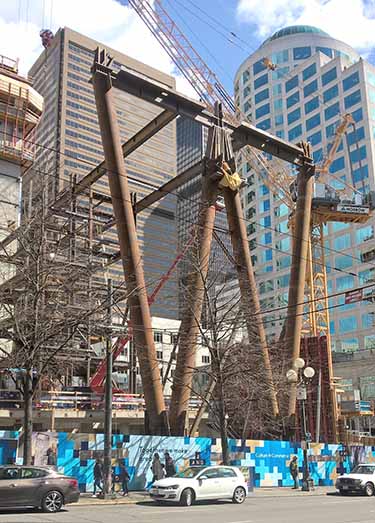 Photo by Benjamin Minnick [enlarge]
Giant steel pipes are going up along First Avenue for 2+U. The office complex will sit above an outdoor open space with retail and entertainment.

A giant “W” has sprouted along First Avenue near Seneca Street in downtown Seattle.

The 85-foot-tall structure is made of large steel pipes that are the first of several columns that will support 2+U, an office complex being built by Skanska. 2+U will hover above a 24,000-square-foot outdoor urban village.

The remaining columns along the perimeter will be Y-shaped, and all will be clad in precast concrete.

Column installation should be done by the end of this month.

Much of the complex will be supported by two concrete elevator cores that will be exposed in the center of the urban village.

2+U will cover most of the block bounded by First and Second avenues and University and Seneca streets. Only the Diller Hotel building remains, on the northwest corner of the block.

An 11,000-square-foot rooftop deck for tenants will be on the 19th floor of the shorter tower. It will have about 1,400 square feet of indoor event space with room for 172 people standing, 112 in conference-style seating or 57 for a sit-down dinner. A smaller conference and event space for 49 people will be on level three facing First Avenue.

2+U will have two storage locations for 326 bikes, as well as bike service stations. Another 40 bike spaces will be outside at the plaza level.

The village will have arts and entertainment space, restaurants and retail.

Skanska USA Commercial Development is the developer, and Skanska's construction arm is the general contractor.

Pickard Chilton is design architect, Kendall/Heaton Associates is architect of record, Graham Baba Architects is designing the retail and Swift Co. is the landscape architect. MKA is structural engineer.

Office leasing agents are CBRE and Newmark Knight Frank. JLL is in charge of retail leasing.