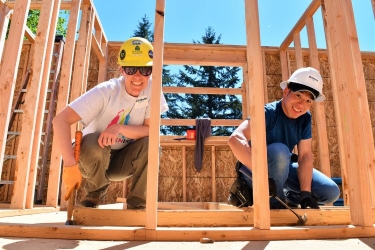 In the winter of 1999, Elizabeth Rinehart found her calling.

Pouring concrete foundations during a cold and rainy Seattle winter, Rinehart realized she had a bright future in construction.

“That experience solidified my love of construction and building affordable housing,” said Rinehart.

Working on Habitat for Humanity projects in King County, Rinehart set out to devote her professional life to constructing housing projects that would make a difference in the lives of people who otherwise could not afford to buy or rent a home.

Nearly 20 years later, Rinehart continues her prodigious work on affordable housing projects and a wide variety of other building projects, as the new general manager of Washington operations for Walsh Construction Co.

Starting at Walsh in 2005 as a project engineer, Rinehart has risen in the ranks in a company that she said shares her passion for affordable housing.

“I was really drawn to Walsh's mission to build affordable housing and to partner with nonprofits. I'm drawn to the mission of helping people and building communities.”

“I can't think of a project that I didn't really enjoy in some way,” she said. “Some were harder than others, but each is so interesting and different and so fulfilling. I'm always plugging away at the projects.”

Rinehart, who took her new post in July, is overseeing projects across the state, including three Seattle projects breaking ground in one to two months that will add nearly 300 units of affordable housing in 2019.

Reflecting on her progression from project engineer to project manager, senior project manager and general manager, Rinehart said she's built her career at Walsh through years of “head-down working.”

Things turned out differently than Rinehart expected, when she was studying urban planning at Ball State University in Indiana. Though she worked briefly early-on as an urban planner, Rinehart, who did her thesis at Ball State on inner-city housing, said she viewed urban planning as “more theoretical, with less tangible results.”

“To counter the theoretical side of urban planning, I really gravitated toward having that outlet of building walls and putting up siding,” she said. “It's really gratifying to build a project, from start to finish, that is a whole building that 200 people can live in and will be there for 50 or 100 years.” 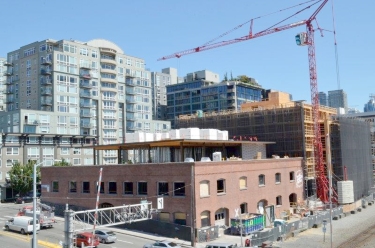 [enlarge]
Walsh is renovating the Ainsworth & Dunn Building in Seattle into offices and is adding a 62-unit apartment building next door. The historic building was home to the Old Spaghetti Factory.

After visiting Seattle in the summer of 1999 for an urban planning conference, Rinehart went to work for Habitat for Humanity. Later, she began working for the city of Mercer Island building department issuing permits and doing plan reviews. At the same time, she went to University of Washington to earn a construction management certificate.

Rinehart said she enjoyed her work for Habitat for Humanity during her early post-graduate years.

As project engineer at Walsh, Rinehart said her mission was to be ready for the unexpected as a problem solver. She took on more responsibility as a project manager, working on increasingly larger projects.

“As a project engineer, I was the main person engulfed in project details, communicating with the architects and owners, managing schedules and team-building on site and staying on budget for the job.”

“Construction projects are a bit like freight trains — they are constantly moving forward, you must make sure the way ahead is clear for everyone to get their work done, and it doesn't easily re-start once it stops,” she said. “So you have to make sure you anticipate as many things as you can to keep people working. I think of my job as a project manager as someone who has to eliminate obstacles, and someone who sets the team up for success.”

Walsh is also managing the Little Saigon project — 69 units of affordable housing for Low Income Housing Institute at Jackson and Rainier in the Little Saigon/International District, starting in about six weeks.

Also, the 501 Rainier project will have 105 units of affordable housing for Plymouth Housing Group at 501 Rainier in the Little Saigon/ID. It starts in eight to 10 weeks.

“One project I'm excited about is the Capitol Hill project, at the Capitol Hill light rail station,” she said. “It's been a long time coming. People will be able to live right there and they can have a normal job and live near downtown. It's exciting to see families staying in the city.”

With the city's population increasing quickly, especially since the end of the Great Recession, Rinehart said she finds it challenging to keep costs down for construction at a time when affordable housing is in demand but there is a labor shortage for construction workers.

“The number of people entering the trades has been steadily decreasing and those with 30 to 40 years of experience are starting to retire,” she said. “When there's not enough people to work, that drives up the cost of construction.”

Nearly 20 years after moving to Seattle, Rinehart, who lives in Magnolia and works at Walsh's offices downtown, said the region is “the most beautiful place ever.” And even though summer is over and locals are gearing up for another rainy winter, Rinehart said she isn't discouraged at the thought of the gray season encroaching.

“Doing construction and being outdoors helps you get through the winter,” she said.