Dick's closer to opening No. 7 — in Kent 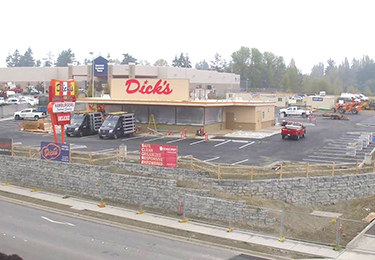 Photo from Dick’s [enlarge]
Signs have been installed for Dick’s restaurant in Kent.

The opening date for Dick's Drive-In No. 7 in Kent is still a little foggy, but crews have installed Dick's famous sign and the Kent staff is being trained in Seattle.

The restaurant — just under 5,000 square feet — is being built by general contractor Schuchart in the Midway shopping center, at 24220 Pacific Highway S. The site is south of Lowe's and just a few blocks from Highline College.

Donovan said about half of the 50 positions have been filled — including several students from Highline College who are taking advantage of Dick's scholarship program. Starting pay is $14 an hour and working students can also earn up to $25,000 in scholarships over four years.

Donovan said there's still no opening date, but one source familiar with the project said it could be open by Thanksgiving weekend.

Most of the exterior is finished but there's still a lot to do inside, including installing specialized equipment.

Dick's bought eight-plus acres earlier this year for $3 million and is using about 2 acres for its project. The remaining 6.5 acres is listed for sale at $3 million by brokers Jeff Kraft and Cramer Foster of Kidder Matthews in Tacoma. They represented Dick's in finding the site.

Donovan said several parties are interested in the remaining land. She said Dick's has improved it by moving utilities, adding sidewalks and building a third entrance to the shopping center.

“Our presence there helps,” she added.

The shopping center is anchored by Lowe's, with Starbucks, Domino's Pizza and other small shops.

The new Dick's will have six service windows and about 100 parking stalls — the most parking of any Dick's and about twice as many as the original location on Northeast 45th Street in Wallingford.