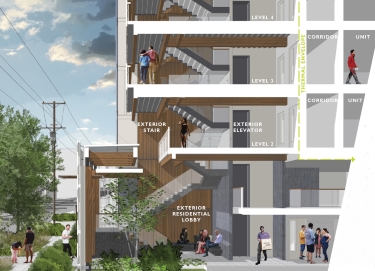 Images from Weber Thompson [enlarge]
Solis’ elevator and central stair will be outside of the building to reduce interior space that needs to be conditioned.

[enlarge]
In the closed position, the automated shades will create a pixelated pattern.

When the summer heat and wildfire smoke hit Seattle, the Solis condominiums on Capitol Hill will be ready.

Air-tight construction and sensor-controlled exterior sun shades will protect the building from overheating, while filtered, fresh air will be provided through a high-efficiency mechanical system.

These techniques are among a handful of innovative strategies that architect Weber Thompson will employ on Solis, a 45-unit condo building at 1300 E. Pike St. that is pursuing the rigorous energy-saving metrics set by Passive House Institute US.

The project recently broke ground and will be ready for occupancy in 2020. When complete, it will be among the first Passive House certified multifamily buildings in the state.

The recently completed Pax Futura apartment building, designed by NK Architects, was the first multifamily building in Seattle to meet Passive House standards. Located in Columbia City, Pax Futura was built by Cascade Built, which is also the general contractor on Solis.

From the outset, Weber Thompson designed Solis to achieve an ambitious “energy use intensity” that is roughly 70 percent more efficient than a baseline multifamily code building, according to Emily Doe, an associate with Weber Thompson and project architect on Solis.

“The adage for Passive House buildings is that it has such a high-performing building envelope that you can heat the home with a candle,” Doe said.

The exterior sheathing joints will be taped to reduce air leakage, saving energy by limiting the amount of conditioned air that is lost. The building's elevator and central stair will be outside of the building to reduce the amount of interior space that needs to be conditioned.

Kirsten Clemens, a senior associate with Weber Thompson and project designer on Solis, said the design began in 2015 with developer 13Pike LLC. The project was shelved for financial reasons until the new owner, SolTerra of Seattle, took control this year.

At the site of the former Fran's Chocolate, Solis' design reflects nearby buildings that are part of Capitol Hill's historic Auto Row. “We have preserved the notion of single-story brick structures on Auto Row,” Clemens said.

For the building's retail, Weber Thompson calls for two “vertically bi-folding, mechanically operated openings that take you into the retail corner,” Clemens said.

A certified Passive House consultant, Doe said the Passive House design “just makes so much sense and is achievable using a standard set of assemblies and construction techniques.”

One of the discoveries made during the design process using iterative energy modeling by ArchEcology was that the project could get away with much less insulated walls and windows than is typically expected on a Passive House building.

“The dense nature of an urban condominium was such that the building will have a high internal heat load generated by resident activity,” Doe said. This means the project can use standard multifamily wall assemblies and still have the energy budget pencil. The building uses 2x6 and 2x8 wood stud walls with high-density batt insulation and double-pane windows.

One of the biggest challenges with the project is keeping the building from overheating. “The minute the sun goes through a window, that heat is inside the building,” Doe said. “If we can stop that before the radiant heat gets inside, that's a good thing.”

Using manually operated window screens to block the heat gain would have been what Clemens called an “analog strategy.”

“In this case, we're going down an automated path by using photoelectric sensors,” Clemens said. The sensors will deploy the screens when the sun hits — providing a layer of defense that interior blinds could not, she said.

Although electrochromic glass — which automatically shades when hit by sunlight — would have been another option, Doe said that type of glass is more expensive and uses more electricity than the Atrium Olympus roller shades on Solis.

She said electrochromic glass is more appropriate for skyscrapers or office buildings, where fewer windows need to be operable. Solis will use Arcade windows made in Poland by Intus that meet the stringent air leakage requirements of Passive House.

The standards, she said, can be met with elements that are “not flashy or expensive.”

For Clemens, who came to Seattle from Oklahoma to pursue sustainable design and align her goals with other sustainability professionals, pursuing the most energy-efficient building designs is common sense.

“Sustainability is one of my passions,” she said. “If we're not making a building more sustainable, what's the point?”