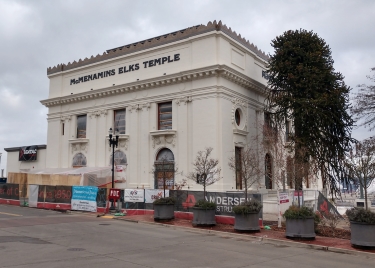 Photo by Benjamin Minnick [enlarge]
Most of the exterior renovation has been finished on the century-old building.

McMenamins now is taking reservations for rooms in the 1915 Elks Lodge in downtown Tacoma that it's converting into a hotel and entertainment venue.

The lodge at 565 Broadway is undergoing a $34 million renovation and will open April 24 as McMenamins Elks Temple.

It will have 45 hotel rooms with private baths, a live music venue, three restaurants, a small brewery, indoor fountain, game room with pool tables and shuffle boards, and several small bars — including one that is tucked under the sidewalk.

McMenamins says it is looking for national and regional acts to play next year in the Spanish Ballroom, which can handle 700 patrons.

A centerpiece of the hotel is a 10-foot chandelier of gilded metal and glass that will hang from the top floor. It took crews six months to restore the piece, which was built in the early 1920s and originally hung in Seattle's Orpheum Theater.

The lodge was filled with graffiti over the 20 years it sat vacant, so McMenamins decided to commission local artists to design artwork throughout the building.

Restoration is being partly funded by local investors.

About 150-200 staff will work at the hotel and venue. McMenamins will begin hiring managers Jan. 17, and other positions on Feb. 11, with events at Tacoma Convention Center.

Ankrom Moisan, the architect for the Elks project, also teamed with Andersen Construction to turn Anderson School in Bothell into a hotel and entertainment complex for McMenamins.

McMenamins operates 55 properties throughout Oregon and Washington. They include neighborhood pubs, breweries, distilleries, a winery, historic hotels and movie theaters.