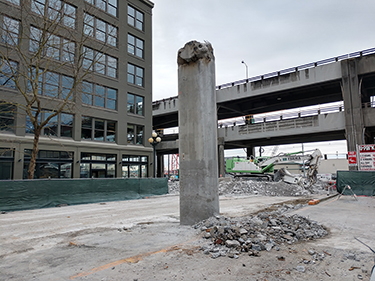 Photo by Benjamin Minnick [enlarge]
This remaining column on Columbia Street will be reused to support a temporary pedestrian bridge.

Kiewit Infrastructure West and subcontractor Ferma have knocked down all but one column of the Columbia Street on-ramp to the Alaskan Way Viaduct and will start demolition of the viaduct's double-deck section as early as tomorrow.

“We are no longer in the shadow of the viaduct,” proclaimed Brian Nielsen, Alaskan Way Viaduct Replacement Program administrator for WSDOT, at a news conference on Monday at Columbia and Western Avenue.

Phil Wallace, senior operations manager at Kiewit Infrastructure West, said they will reuse the column to support a temporary pedestrian bridge that will connect part of the existing Marion Street bridge to Colman Dock. The temporary bridge will be made of steel supported by concrete columns running down Western and Columbia. It is expected to open in July and be used for four to five years as the waterfront is redeveloped.

Wallace said demolition will likely go faster as crews travel north from Columbia Street. When they get to the Seneca Street off-ramp, some workers will branch off to demolish that ramp.

It will likely be a couple of months before the work zone on Columbia reopens to traffic. Sidewalks have been restored in some parts.

Ferma also has removed about 360 feet of roadway in eight spans near the Seattle Aquarium. That's about 4.2 million pounds of concrete and steel.

At the third work zone, north of Lenora Street, crews have removed about 650 feet of the four-lane bridge in about 15 spans and three spans of the Western Avenue ramp. Together, that's about 10.2 million pounds of concrete and steel.

Ferma is using about 30 pieces of demolition equipment.

Concrete is being stored at Terminal 25 and will end up as fill for the Battery Street Tunnel; some will initially be used as bedding in active demolition areas to protect the roadway and utilities.

Nielsen said the waterfront tunnel that replaced the viaduct was lightly used right after it opened last month due to snow and closed schools, but now handles about 60,000 vehicles daily. The viaduct handled about 90,000 vehicles before it was closed in January.