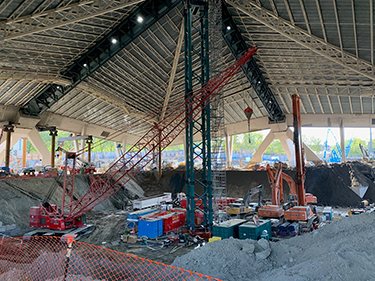 Photos by Brian Miller [enlarge]
Shoring and partial excavation are underway beneath the arena’s iconic roof.

The Ys are being snipped. On a press tour yesterday inside the massive excavation pit beneath its landmarked roof, the original Y-shaped structural supports of Paul Thiry's arena at Seattle Center were mostly irrelevant. One was even dangling, alarmingly, as owner's rep Ken Johnsen and Greg Huber of general contractor Mortenson posed for photos beneath.

Demolition, which began last winter, is essentially over at the former KeyArena, which has yet to be renamed. (Oak View Group, which owns the facility and is funding its $930 million expansion, hasn't yet sold the naming rights.)

“The basic building is gone,” said Johnsen. We are not renovating the building — we are building a whole new arena. We're really excited to show you the progress we've made.”

At the last press tour in April, demolition had barely begun inside the arena, where the concrete stadium seating was still intact. No more.

What's underway now is the shoring and partial excavation beneath the iconic roof. As originally built, the arena is supported by 20 Y-shaped columns (or footings), plus the four so-called “chevrons” that are so prominent outside. As Johnson and Huber explained amid the deafening noise inside the pit, each Y is being braced by steel columns and girders (and the chevrons, too). Mortenson calls it temporary roof support, or TRS.

That process began in late June. As the technique has been refined, said Huber, each Y now takes about a week to brace. “We're in a real rhythm now.”

Only a few remain to brace on the west side of the arena (along First Avenue North). Other Ys, with the 44 million-pound weight of the roof already supported overhead, are being snipped. (In about a year, the Ys will be reconnected with the new foundation below — and will again become structural.)

Outside and inside the arena, crews from Malcom Drilling have been busily installing new support pilings to a depth of about 80 feet below grade. Others on Mortenson's team are JR Hayes, excavation; Rhine Demolition; and James W. Fowler Co., tunneling. The architect is Populous of Kansas City, Missouri.

Down below in the pit, there's also a central steel support column — something like a tent pole — to help support the roof. The column is being closely monitored with sensors to detect any shifts or cracks. So far, so good.

All told, Johnsen and Huber estimate there will be around 70 TRS columns, plus maybe 140 girders for bracing, with a total weight of around 4,500 tons. “It's an amazing engineering effort,” said Johnsen. 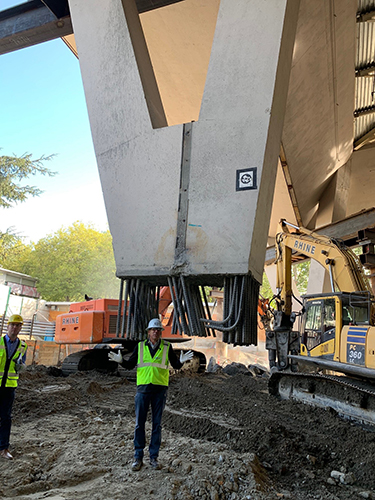 [enlarge]
Some of the Y-shaped columns are being snipped in preparation for excavation. In about a year, they will be reconnected with the new foundation.

Once the roof is completely supported and all the Ys are snipped, a little later this fall, the serious digging will begin. “That will allow us to excavate down,” said Huber.

The arena bowl will be lowered another 15 feet from its original depth, which is currently about 60 feet below grade outside (i.e., the rim of the arena). Huber thinks that excavation will be done by Christmas.

The new foundation will encompass a much bigger area below grade — that's what allows more seating and amenities for sports and concerts. Some of the estimated 600,000 cubic yards of dirt has been removed, with much more to follow.

The new arena will roughly double in size, from about 400,000 to 750,000 square feet. Some of that above-grade space will extend beyond the Thiry arena's original footprint. All the surrounding plazas will be completely redone.

The old tunnel entrance at Thomas Street, now being used by contractors and visiting press, will be replaced with a new truck and bus tunnel to the underground loading dock. That new tunnel entrance will be south of the landmarked Bressi Garage (aka Pottery Northwest), at John Street.

Also during construction, the roof will also be accessed via temporary interior scaffolding for seismic and acoustic upgrades. And, for an arena that was built in a relatively short period of time by Howard S. Wright Construction for the 1962 World's Fair, said Johnsen, the roof and supports remain in good shape. “All in all, it was a superb structure.”

Once the new foundation is done, the temporary steel supports will be removed. Then Mortenson will change directions.

“In 2020, we'll be coming up,” said Johnsen. The mostly glass curtainwall and above-grade structures will begin in 2021, with the goal of being done that summer or fall — in time for the new Seattle NHL team to begin playing there.

Getting the old KeyArena logo off the roof won't be a problem, said Huber. A crane can reach that, and also affix some new corporate logo. (Inside that signage are some old cooling and exhaust fans that still function, but will be more artfully enclosed.)