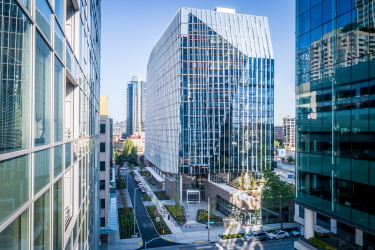 Photos provided by Seattle Children’s [enlarge]
The 13-story Building Cure will be a place where scientists translate lab discoveries into life-changing therapies for children, according to Seattle Children’s. 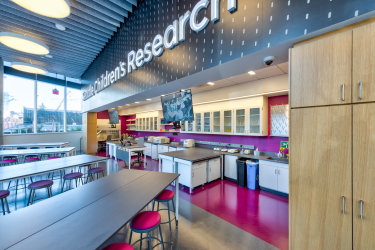 [enlarge]
Students in grades eight-12 will be able to do experiments related to the immunotherapy, gene editing and other fields in the building’s Science Discovery Lab.

Completed parts of the building include lab space on the 10th floor and The Cure Factory on the 12th floor, which is where Seattle Children's will manufacture cell therapy products for early phase clinical trials.

Seattle Children's said that each year the Cure Factory is capable of manufacturing cancer-fighting T cells and other cell therapies for up to 1,000 children.

Other lab space in Building Cure will be built out and developed over time to accommodate the research institute's growth in a way that's responsive to future pediatric research needs and technological breakthroughs. The lab space is designed to allow teams to share resources and work on problems while exchanging lessons learned.

“It's an exciting time for science in Seattle, a city known worldwide for its contributions to technology and innovation,” said Dr. Jeff Sperring, CEO of Seattle Children's.

“Building Cure will not only help today's researchers fulfill our mission to help every child live the healthiest and most fulfilling life possible, but also inspire future generations of scientists to bring more cures to more children faster.”

The building also has administrative space, a lobby, a large meeting room, retail spaces, 290 parking stalls, a 225-seat auditorium with a high-definition video wall, and a lounge with a student-union-like feel that is connected to a rooftop deck and garden.

There's also a Science Discovery Lab, where students in grades eight-12 can meet and learn from scientists and do authentic experiments directly linked to immunotherapy, gene editing and infectious disease research. Plans are to offer year-round after-school programs and Saturday science clubs, teacher development and community events at the lab, potentially serving 10,000 students, 100 teachers and 2,000 community members per year.

The building is targeting LEED Gold certification. It has all-LED lighting, low-flow plumbing fixtures and chilled beams in offices and labs to regulate the temperature. A heat recovery system will provide heat to the building.

Flad Architects is the prime architect for labs and interiors, and Aedas is the architect for shell and core, and common areas. Lease Crutcher Lewis is the general contractor, and Andrew Clapham & Associates is providing project management.

Seattle Children's Research Institute has a workforce of more than 1,900 and is doing research in 175 areas. It said it is ranked fifth in the nation among pediatric research institutions for National Institutes of Health funding.