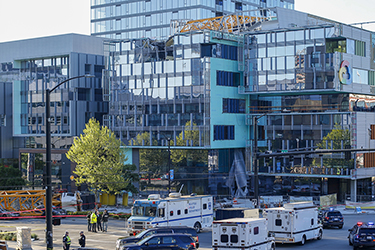 AP file photo/Joe Nicholson [enlarge]
The crane collapsed on April 27 during the construction of a Google office building.

TUKWILA — Washington state on Thursday fined three companies a combined $107,200 for their roles in a crane collapse that killed four people in Seattle last April, with officials calling the accident “totally avoidable,” and Seattle Police confirmed that they have opened a criminal investigation.

The Department of Labor and Industries released the results of its investigation Thursday. It found, as experts suspected, that the crane toppled in a wind gust because the workers who were disassembling it prematurely removed pins securing sections of the crane's mast, contrary to the manufacturer's instructions.

The practice appears to have been common in the industry, even though it had led to fatal collapses before, investigators said.

The collapse occurred April 27 in the booming tech neighborhood of South Lake Union, where the crane had been used in the construction of a Google office building. Sections of the crane landed on the building and on traffic below, striking six vehicles. Two ironworkers on the crane were killed as were two people in cars. Four other people were injured.

“The incident that occurred was totally avoidable,” department Director Joel Sacks said at a news conference. “If the companies on site had followed the rules, the crane would not have fallen.”

Det. Patrick Michaud, a spokesman for Seattle Police, said he could offer no details about the criminal case except to say it is being headed by violent crimes detectives. Labor and Industries officials said they cooperated with information requests from police.

Crane collapses have resulted in criminal charges before. New York prosecutors brought manslaughter charges in two separate collapses in 2008, one alleging that a rigger failed to adequately secure the crane, and the other alleging the crane's owner had irresponsibly hired a cut-rate repair company to work on it before it fell. Both cases ended in acquittals.

Morrow was most culpable because it was the expert on site and should have known and ensured the manufacturer's instructions were followed, regulators said, while the other companies were cited for not having a supervisor present, inadequate training or other violations.

Two other companies that were investigated were not responsible, officials said.

The companies have 15 days to appeal. Morrow did not immediately return an email seeking comment. In an emailed statement, GLY President Ted Herb said the Bellevue-based company was deeply concerned by the collapse, cooperated with investigators and had already made changes.

Herb said the company will “do everything possible to protect our workers and the community.” GLY declined to comment about the criminal case.

Brian Haight, crane program manager with the department, said that the manufacturer's instructions say the crane should be dismantled in sections. As a secondary crane is attached to the top of the section being removed, workers pull the pins for that section only, leaving the rest of the tower secure. The pins are about 16 inches long and weigh 26 pounds.

At the crew's pre-task meeting that morning, they did not review the manufacturer's instructions for crane removal, Haight said.

That afternoon, the secondary crane couldn't function because of high winds. So the disassembly crew, while waiting for the winds to die down, decided to remove the pins up and down the tower crane and to loosen the bolts attaching the tower to its concrete base. When a gust of around 50 mph hit, the crane swayed and collapsed.

Early pin removal was blamed after a tower crane mast collapsed during disassembly in Dallas in 2012, killing two workers. Terry McGettigan, a tower crane specialist in Seattle, wrote a paper after the Dallas collapse warning about the danger of taking shortcuts.

Following the April collapse, the department issued a hazard warning that was shared among the crane industry internationally. It also asked crane companies in Washington to notify them of assembly or disassembly of any tower cranes, so that the department can send an auditor to inspect the crane and ensure proper procedures are followed.

It is also re-examining its rules for crane operations and is considering making that notification request mandatory instead of voluntary.

The $70,000 fine issued to Morrow was the maximum allowed under state regulations for a single, willful violation of workplace safety rules, unless a company has a prior history of such actions before, said Anne Soiza, the department's assistant director.

David Beninger, a Seattle lawyer who plans to sue on behalf of one victim's family, said the state's investigation had explained how the collapsed happened, but not why.

“That's what the civil litigation will try to get at,” he said. “We know procedures were broken, but how often, and why? This is a fairly widespread practice of cutting corners, and that's a concern.”