Here's your chance to own a chunk of Seattle's viaduct 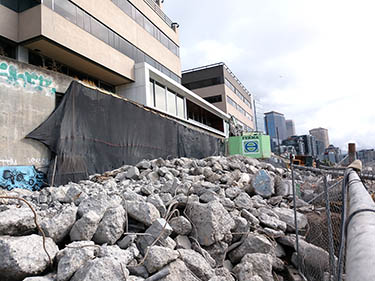 Photo by Benjamin Minnick [enlarge]
Viaduct demolition produced an estimated 60,000 cubic yards of rubble. Most of that was used to fill the decommissioned Battery Street Tunnel.

A lump of coal in your stocking this holiday? That's so 19th century.

This year, the Washington State Department of Transportation is offering a modern twist on that tradition — a chunk of concrete rubble from the Alaskan Way Viaduct — and it doesn't matter if you're naughty or nice.

WSDOT reports it has received many requests for commemorative pieces of viaduct concrete and today will start giving away small chunks at Friends of Waterfront Seattle's space at 1400 Western Ave. near the Pike Place Market.

Friends of Waterfront Seattle runs the space to showcase plans for Seattle's rebuilt waterfront. It is open noon-5 p.m. daily, except Mondays and Tuesdays.

WSDOT reports that only four columns remain from the hundreds that once supported the aging viaduct, and by next week it will be history. The remaining columns are north of Pike Place, near the Lenora Street pedestrian bridge.

Prime contractor Kiewit Infrastructure West and demolition subcontractor Ferma this week are expected to cut and lift out the final pieces of the viaduct, dismantle the crane used for that operation and start demobilizing. There still will be some punch list items and slope stabilization work left after that.

With the viaduct gone, Waterfront Seattle has begun mobilizing crews along the south waterfront between Marion Street and South King Street. They are building a new Alaskan Way surface street where the viaduct once stood. Initial work involves potholing, breaking pavement and excavation for utility installation.

The DJC reported earlier this year that Gary Merlino Construction Co. won a $189.1 million contract from the city of Seattle to build the new Alaskan Way corridor along the waterfront. That job includes improvements to Columbia Street to make it a bus corridor linking Third Avenue with Alaskan Way for buses traveling between downtown and southwest King County.

Merlino's contract is one of the first parts of the $724 million Waterfront Seattle project, which will rebuild Alaskan Way from South King to Pike streets, and build a new street, known as Elliott Way, from Pike to Bell streets. The new surface street will span a total of 17 blocks from Pioneer Square to Belltown, with two lanes of traffic in either direction for the majority of the street.

Waterfront Seattle will also construct a park promenade along the water, rebuild piers 58 and 62, build an elevated connection from Pike Place Market to the waterfront, and improve east-west connections between downtown and Elliott Bay.

The waterfront rebuild is expected to be finished in 2024.