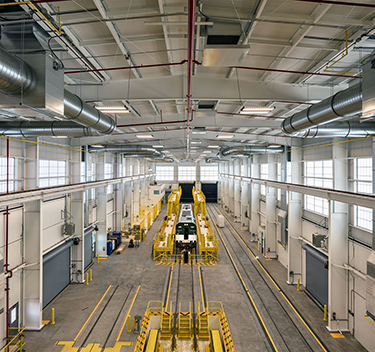 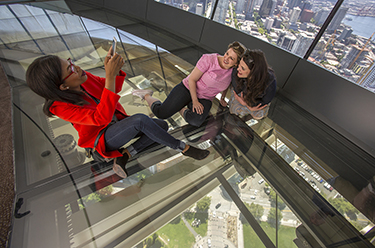 Photo by John Lok/Space Needle LLC [enlarge]
Hoffman was cited for its work on the Space Needle, which included new glass floors.

The Northwest Construction Consumer Council earlier this month handed out seven awards as part of its 2019 Distinguished Project Awards program.

An NWCCC email says the association received a record number of nominations this year. The projects were judged on safety, meeting goals and objectives, early planning and support, cost and schedule, and unique features.

Here are the winners:

The NWCCC email listed BP as the contractor for the Cherry Point projects, Hoffman Construction for the Space Needle and Oak Harbor projects, PCL Construction Services for the Amtrak facility, and King County Solid Waste Division for the Enumclaw project.

Attempts to reach NWCCC for complete team lists were unsuccessful.

A news release from PCL said its project included demolition of an old warehouse and construction of the 31,000-square-foot locomotive service facility in its place at the King Street Coach Yard in Seattle. The new structure is a pre-engineered metal building that protects train maintenance workers from the elements and has improved air-quality control. It provides Amtrak with repair capabilities that could not be done in the old building.

“We are extremely proud of the work completed by our staff and all of our subcontracting partners who helped to complete this facility for Amtrak,” said Aaron Wiehe, PCL vice president and district manager, in a statement. “The project teams worked for nearly two years with a perfect safety record to ensure that our people go home to their families safely each and every day.”

NWCCC is an organization focusing on cost-effective construction practices. The awards were presented Nov. 6 at NWCCC's annual conference at the Lynnwood Convention Center.