City to seek contractor for stair from Union Street to waterfront 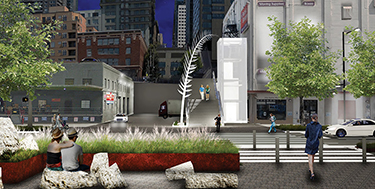 Waterfront Seattle document images [enlarge]
The new stairway and elevator off Western Avenue will be sandwiched between Seattle Antiques Market and Public Storage. 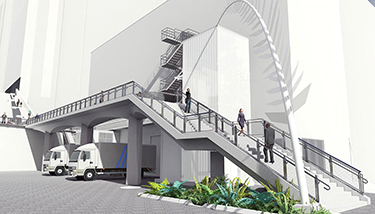 [enlarge]
An arching fern frond over the stairway was designed by Seattle artist Norie Sato.

For years, people wanting to get to the waterfront from Union Street have navigated a bouncy metal stairway hanging off Western Avenue. Then they sometimes dodged trucks loading and unloading in the space at the stair landing between Seattle Antiques Market and Public Storage.

A fix for that is coming, as the city of Seattle's Office of the Waterfront and Civic Projects has finished designs for a new pedestrian connection that nixes the old metal stairs for a concrete walkway spanning the truck loading zone. The walkway will safely carry pedestrians over the loading zone to a new concrete stairway that will land on a new sidewalk near the future alignment of Alaskan Way. An elevator will be provided for those who can't navigate the stairs.

The new waterfront connection will have several elements designed by Seattle artist Norie Sato, including a 43-foot-tall fern frond arching over the staircase. The fern theme will be carried over to an art screen wall, which will have fronds backlit by LEDs.

The retaining wall holding up the west side of Western will remain exposed. The project includes pedestrian improvements to the intersection of Union and Western. Union Street is discontinuous in the area for vehicles.

Early plans showed another new pedestrian ramp and elevator, off the east side of Western, connecting to the Four Seasons hotel that perches above Post Alley. Those plans were later scrapped by the city and the existing dauntingly steep staircase to the hotel will remain.

The city could seek a general contractor as early as next month for the Union Street staircase. It expects to award a contract in June, start construction in the summer and finish in 12-14 months. An engineer's estimate pegs construction costs between $7 million and $8 million.

The design team is led by Jacobs Engineering Group.

The project is part of the $728 million redevelopment of the central waterfront, which is picking up steam now that the Alaskan Way Viaduct has been removed. Included is a new Alaskan Way corridor being built by Gary Merlino Construction Co. under a $189 million contract.

Merlino's work includes rebuilding the Lenora Street pedestrian walkway/ramp north of Pike Place Market that connects to the waterfront. Crews are reworking the ramp so that it will match up with the new Elliott Way.

Merlino also will make improvements to Seneca Street where the viaduct's off-ramp was stacked above it, south of Harbor Steps apartments and west of First Avenue. The city early on was considering an overlook from First, but will now keep Seneca dead-ended below First and retain the staircase from First down to Seneca and Post Avenue.