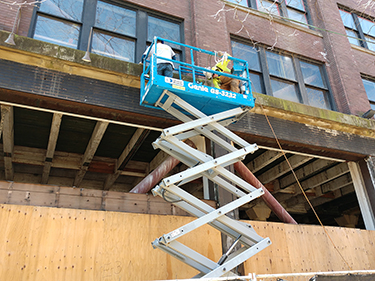 Photo by Benjamin Minnick [enlarge]
Crews on Friday worked on the exterior of the Manufacturer’s Building in Seattle’s Pioneer Square. The former home to F.X. McRory’s is part of a three-building redevelopment by Manchester Capital Management. Chinn Construction is the general contractor.

The Associated General Contractors of America held a webinar on Friday to update its members on the COVID-19 pandemic and how it is impacting the construction industry.

AGC CEO Steve Sandherr said the association is treating the outbreak with the same type of triage that medical professionals use. He said the AGC has adopted four protocols for its members: to keep their projects going; to protect them against adverse government policies; to seek help for them from Congress and the Trump administration; and to help them keep employees safe, their doors open and mitigate future losses.

Sandherr said the AGC wants to get clarification from the federal government that construction is an essential service and thereby exempt from potential quarantines. He added that contractors already wear personal protective equipment, limit access to jobsites and can mobilize for potential disasters easier if their people aren't idled. “Given the precautions already in place, halting construction will do little to protect the health and safety of construction workers,” he said Tuesday in a news release about shutting down jobsites. “But it will go a long way in undermining economic vitality by depriving millions of workers of the wages they will need over the coming days. At the same time, these measures have the potential to bankrupt many construction firms who have contractual obligations to stay on schedule or risk incurring significant financial penalties.”

Some contractors are starting to have other problems on their jobsites: 16% reported a shortage of materials, equipment or parts; 11% had a shortage of craft workers; 18% saw a shortage of government workers for approvals and inspections; and 22% said their suppliers have informed them of late or canceled deliveries.

AGC Chief Economist Ken Simonson said many jobsites using Chinese materials benefited from advanced shipments ahead of the Chinese New Year last month, when production is typically curtailed in that country. Now, it's more difficult to get those materials as factories have remained closed due to the virus.

“There are a lot of things that are impeding construction at this point,” Simonson said.

The future isn't too rosy, either.

Simonson said once current projects finish, it will be a long time before owners have confidence or finances to resume new construction projects. In the short term, there may be a limited number of projects to build temporary hospitals, shelters and laboratories.

Simonson said contractors should also get a break from fuel prices, which are continuing to drop, and an expected drop in material prices as demand slackens.

Perlberg said contractors need to be mindful of construction contracts going forward. For example, the standard AIA A201 contract — which sets general terms between the architect, owner, contractor and often subcontractors — doesn't specifically mention epidemics or pandemics, instead it has clauses for forces that can't be controlled by the general contractor.

Perlberg said ConsensusDocs has a more detailed force majeure clause in it that mentions epidemics and adverse government actions, which could apply to involuntary jobsite shutdowns.

“You have to read your contract,” he said.

Friday's webinar proved so popular that the AGC had to add a second session to keep its system from overloading. The association also has put together an eight-part webinar series that dives deeper into topics such as paid and unpaid leave for workers, contracts, project continuity plans, and keeping up IT systems during high demand. The first webinar is today and the last is on April 1. (See the information box for the link to AGC's COVID-19 resource page.)

Simonson said economic recovery from COVID-19 will be slow, and the long-term result could be fewer people working in offices and lower attendance at sporting events and other large gatherings. He said the U.S. economy has bounced back from past problems and he expects it to do the same with the coronavirus outbreak.