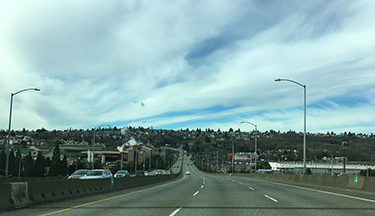 SDOT photo/Flickr [enlarge]
Repairs to the bridge could take months.

A Seattle City Council news post said the high-rise portion of the West Seattle Bridge was to have closed last night until further notice due to structural issues and concrete cracking.

According to a summary from the Seattle Department of Transportation, it and “contracted bridge integrity specialists” will conduct additional assessments and make further recommendations on the best way to move forward.

SDOT says the West Seattle Bridge has been monitored regularly since 2014, but last year the federal load rating for this type of bridge changed, so SDOT and structural engineers started a new review of the bridge that includes regularly inspecting concrete cracks.

The agency says an SDOT inspector recently found known cracks in the concrete had worsened at a rate that SDOT and the structural engineers found unacceptable. An outside review of the deterioration rate then confirmed the need to close the bridge.

Assessments are expected to take several weeks and SDOT says the bridge could remain closed for months.

The West Seattle Blog reported that SDOT engineer Matt Donohue said a post-tensioning steel strand in the bridge supports is the source of the problem. The blog also reported SDOT Director Sam Zimbabwe said repair work could start with shoring followed by fiber wrap and other things.

The city is rerouting buses, freight and emergency vehicles to the Spokane Street Bridge, also called the low bridge. Those vehicles will use surface streets in West Seattle and Sodo to access the low bridge.

Motorists won't be allowed on the low bridge, instead they will directed to the First Avenue and South Park bridges.

“After learning today that the Seattle Department of Transportation was indefinitely closing the West Seattle Bridge due to structural concerns, I directed King County Metro to immediately begin planning alternate routes on both sides of the Duwamish, and to increase frequency of and connections to the King County Water Taxi,” said King County Executive Dow Constantine in a statement on Monday.

“With commuters taking seriously our public health directives to stay at home, we will use this moment to plan for the rebound,” Constantine said. “As a lifelong West Seattleite, I know how difficult it can be for the 80,000 or so of us on the peninsula when connections with the rest of the region are interrupted. We will do everything in our power to make sure West Seattle has strong transit alternatives during bridge repair.”