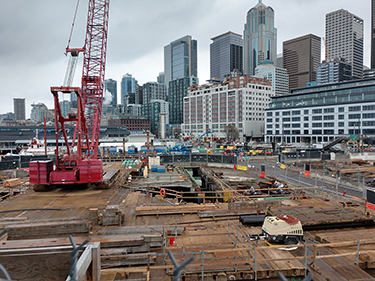 Photos by Benjamin Minnick [enlarge]
Crews were absent yesterday at the $455 million Colman Dock project in Seattle. A joint venture of Hoffman-Pacific is building the project for Washington State Ferries, which is part of WSDOT. 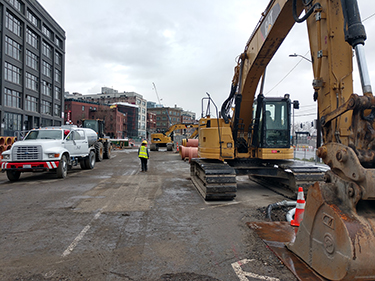 [enlarge]
Gary Merlino Construction was on the job yesterday for the new Alaskan Way corridor project for the city of Seattle. It was unclear if workers were shutting down the site or continuing operations.

Gov. Jay Inslee removed most of the gray area from what comprises an “essential workforce” — putting most construction projects on hold as the COVID-19 outbreak continues.

A big blow came when the Washington State Department of Transportation also announced Wednesday night it was closing all of its projects due to the virus. The few exceptions for WSDOT include fish passage projects and those needed for safety.

A memo that followed from the Associated General Contractors of Washington said its members were planning to proceed with all WSDOT projects, but “apparently this was subsequently overruled by the Governor.”

David D'Hondt, AGC of Washington executive vice president, said his group was working with WSDOT on Tuesday and all indications were that construction would continue for those projects.

“The biggest surprise was that WSDOT was going to shut down,” he said. “They did a 180 and I think even WSDOT was caught off guard.”

D'Hondt said a substantial number of AGC members have been idled from this. He said the last-minute notice coming late Wednesday night had contractors scrambling on Thursday to button up their jobsites.

Some of those jobsites can be secured in a day, but others will take several days, according to D'Hondt, who added that shutting down jobsites doesn't violate the proclamation.

Washington State Construction Engineer Chris Christopher sent a bulletin to pre-qualified WSDOT contractors, informing them to shut down their jobs.

It read: “While transportation is an essential function during a National Emergency, WSDOT's priority at this time is to ensure the safety of its employees, partners, and the public while continuing to deliver an essential service to the public. We have worked very closely with our contractor, labor, and industry partners to ensure safety measures are met and maintain them as best possible, though despite these efforts, COVID-19 continues to impact construction throughout the state.

“Consistent with the Governor's Stay Home, Stay Healthy proclamation, WSDOT is temporarily suspending all construction projects, effective immediately. This suspension broadly covers all of our projects with a small number of exceptions that will be clarified on project specific basis.”

Christopher said the state will consider allowing certain administrative or design-related activities that conform to the proclamation.

In a press conference on Thursday, Inslee reiterated that the exemptions include construction necessary for essential businesses such as grocery stores, for public purposes and to preserve existing assets.

“There's going to be some gray areas here,” Inslee admitted.

Inslee said the state is seeing some signs of progress on fighting COVID-19, with the infection rate curve slightly flattening for the Puget Sound area, though not for other parts of the state.

For now, the state is working on boosting hospital capacity and is getting federal assistance for that. For example, there is a 146-bed Army field hospital coming from Colorado.

Inslee said they are looking at several locations for portable hospitals, with the initial deployments in the Puget Sound area because that's where the bulk of coronavirus cases currently are.

Inslee said we have not turned the corner and are not near the end of the outbreak, but closing businesses and prohibiting gatherings has apparently reduced the spread.

The two-week, work-from-home order is in effect until April 6, but would likely be extended if the outbreak continues.

“We've got to pound it and pound it until it's done,” Inslee said.