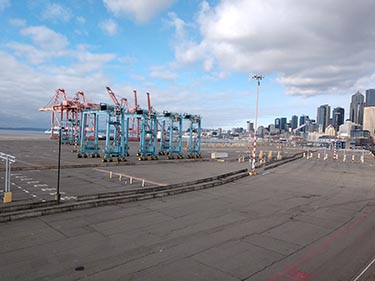 Photo by Benjamin Minnick [enlarge]
The Port of Seattle and NWSA have offered vacant space at Terminal 46 to stage materials for a mobile hospital being built at CenturyLink Field Event Center.

The Army Corps of Engineers has ramped up its contracting process to speed the construction of mobile hospitals across the nation, including the first in Seattle inside CenturyLink Field Event Center. The mobile hospitals are treating non-COVID-19 patients to relieve pressure on permanent hospitals.

The corps held a webinar last week detailing how it is assisting other agencies in building alternative health care facilities. It said it's trying to get ahead of the virus curve. As of Thursday, it was looking at 114 potential sites and making 81 assessments, and selected eight sites and had four contracts pending.

Christine Altendorf, chief of the corps' Engineering and Construction division at its Washington, D.C., headquarters, said her agency is used to dealing with hurricanes and floods, but this is different because it affects the entire country.

“We're in a complete learning mode, this one's a challenge,” she said.

To fight COVID-19 as quickly as possible, the corps has decentralized its contracting process, letting its district offices handle the details. Also, emergency contracting is being used.

In some cases, the corps will do the contracting and in other cases it will be handled by the state with assistance from the corps. Ideally, the corps wants contractors with experience in building modular shelters.

Mike Schultz, chief of the corps' Interagency and International Services division, said his agency is giving technical advice and assistance under Federal Emergency Management Agency guidelines. That could involve converting or retrofitting existing structures such as hotels, dorms, apartment buildings, arenas or convention centers. The corps may obtain rights/ownership for the property and then hire a contractor to build out the space.

Some things that need to be considered when building a mobile hospital include the need for existing utilities and infrastructure, installation of washable walls and floors, a negative-pressure HVAC system, and supply and installation of medical equipment.

Chip Marin, programs director of the corps support center in Huntsville, Alabama, said they recommend that mobile hospitals locate within 10 miles of a permanent hospital for hazmat disposal, laundry and pharmacy needs. He said the corps prefers to use state-owned facilities because they can be developed quicker.

Marin said hotels built after 1990 are also preferred because there shouldn't be any hazardous construction materials in those buildings to deal with.

Other tips provided by Marin included: central HVAC systems are easier to control and modify than individual units; buildings must meet life/health safety codes; existing backup power is desired; and the fewer modifications needed, the better.

Marin offered this example of what needs to be done to an existing motel/hotel to convert it into medical use: Remove carpet and install vinyl or epoxy flooring in rooms; review the HVAC system; install perimeter fencing; and make space for a pharmacy, medical gas storage and check-in operations.

Schultz said retrofits should be done in a matter of days to a few weeks. He said the corps wants to move quickly to fight the disease wherever it flares up.

For the field hospital at CenturyLink, the Port of Seattle and Northwest Seaport Alliance are making sections of nearby Terminal 46 available for staging trailers and equipment. Foss Maritime, NWSA's approved licensee to operate cargo operations at T-46, is helping.

Schultz said hot spots for COVID-19 are the Northeast and the cities of Miami, New Orleans, Dallas, San Francisco, Seattle and Chicago.