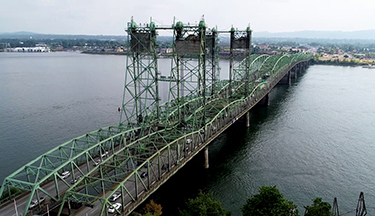 Photo from WSDOT [enlarge]
The existing I-5 bridges over the Columbia River are aging and in need of seismic upgrades.

A stalled megaproject that would replace the Interstate 5 bridges over the Columbia River between Portland and Vancouver is moving forward today with an advertisement in the DJC for an engineering consultant.

The Interstate Bridge Replacement Program is a joint effort between the Washington and Oregon departments of transportation, with each state equally sharing the cost. Today's advertisement seeks a consultant or team of consultants to support both transportation departments and regional partners under a $44 million contract that could be expanded.

Frank Green, WSDOT assistant program administrator, said the project so far has $35 million in state funds from Washington and $9 million in federal funds from Oregon.

Green said submittals are due June 18 and a consultant or consultant team will likely be selected in July using a two-step evaluation approach that includes interviews with the highest scoring firms. The winner would have to start in August to meet a legislative milestone. A National Environmental Policy Act reevaluation would also need to start during this time to meet a federal milestone.

A pre-submittal meeting will be held May 28 online for proposers.

Originally called the Columbia River Crossing, the program to replace the bridges started in 2004 as a bi-state megaproject but came to a halt in late 2013 when Washington lawmakers decided not to pay their share of the project. The proposal was dormant until December 2018, when Washington Gov. Jay Inslee included $17.5 million in his budget to open a project office for replacing the bridges.

According to Green, it's tricky at this early stage to come up with a project budget, but the old project cost was pegged between $2.7 billion and $3.2 billion. He didn't know if the new project will be above or below that original estimate. “That will be a key question early on in the program,” he said.

A conceptual finance plan is due by Dec. 1 to meet another legislative milestone. Funding could come from the federal government, the two states or through tolls — or a combination of them.

Green said an environmental impact statement and draft construction documents finished between 2005 and 2014 could figure into the new plans.

A December progress report from both DOTs showed summer 2025 as the targeted construction start date. Green said it's hard to say how long construction would take because the project is in early stages, but the old plan allotted seven to 11 years for the entire program, from planning to opening. He said they want to have the environmental review completed by summer 2023 and then start right-of-way acquisition.

Green said the old plan called for using design-build for several key parts and the DOTs will look at design-build and other innovative ways to deliver construction this time around.

Green said the new bridges will probably be downstream of the existing bridges because the previous program recommended that. He said the design team will need to review that to see if anything as changed since then.

The Columbia River crossing has a northbound bridge built in 1917 and a southbound bridge built in 1958. WSDOT's website on the replacement program says operating and maintaining the bridges costs about $1.2 million each year, split evenly between the DOTs. Larger maintenance projects are expected to top $280 million over 20 years and don't include a needed seismic retrofit.