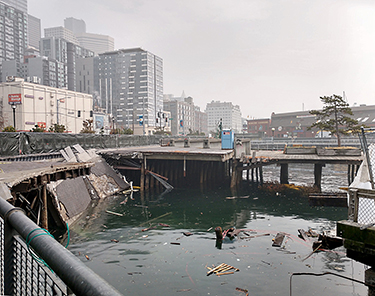 Photo by Benjamin Minnick [enlarge]
This section of Pier 58 dropped into Elliott Bay.

The city yesterday held a media briefing on Pier 58's status and released a dramatic video of Sunday's partial collapse of the structure.

Marshall Foster, director of the city's Office of the Waterfront and Civic Projects, said the group is still deciding what is needed to retrieve about a fifth of the 48,000-square-foot pier that collapsed and fell into Elliott Bay, taking a 46-year-old fountain made by artist James Fitzgerald with it. He said the city is working with Orion Marine Contractors, which it hired last month under a $4.3 million emergency contract, to review the demolition plan and sequencing to restart work. No crew members were spotted yesterday working on the pier.

In early August, officials from Seattle Parks and Recreation fenced off the pier after it shifted several inches, creating a gap between the pier and adjacent land. Seattle Structural then inspected it and recommended that the entire structure be removed within 90 days.

Marshall said workers found a significant uptick in the pier's movement on Friday, about double the rate it had been moving. An alarm was installed that alerts workers to significant movement in the pier. That was backed up with a worker manning an air horn to make sure everyone could hear the alarm.

Crews removed about 20,000 pounds of weight on Saturday from the northeast corner of the pier. That area was targeted first because Seattle Structural's report found that steel piles supporting the concrete platform below the fountain were failing. Sunday's collapse came with a few seconds of warning from the alarm, followed by the air horn. Still, two workers fell into the water, but were not seriously injured.

Workers on Sunday were sawcutting a 20-inch-thick section of concrete wall. That section was tethered to a barge-mounted crane and didn't go into the water. Orion's subcontractor for the work is Evergreen Concrete Cutting of Pacific.

Foster said the collapse was very quick and in a vertical fashion. In the video, a tree in a planter can be seen dropping first, followed by swaying in a concrete frame before the whole section hits the water. EnviroIssues provided the video.

The adjacent Pier 57 to the south and City Light electrical vault to the north by the Seattle Aquarium were not damaged, nor was the seawall.

Foster said they don't know what condition the Fitzgerald fountain is in, but they plan to salvage it for use in the replacement pier that will be part of a $728 million multi-year program to transform the waterfront. The pump house that fed the fountain also is at the bottom of Elliott Bay.

Foster said the submerged concrete elements will need to be taken apart — if it's decided they will be retrieved — due to their size and weight.

He said the incident won't impact the 2022 start of construction for the new pier because the demolition of the old pier was moved up due to its deteriorating condition. The city wanted the pier removed by early 2021 after Seattle Structural's report. It's unclear if that deadline has been impacted by the collapse.