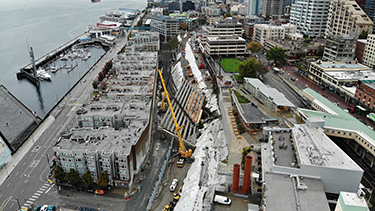 Photo from city of Seattle/Granite Construction [enlarge]
The girders were installed during six-hour windows at night, when train traffic was low.

On Tuesday, Waterfront Seattle's team finished placing 18 girders over the BNSF Railway tracks just northwest of and below the Pike Place Market's MarketFront building. This operation is one of the first major structural and visible milestones toward building the bridge for the new Elliott Way, according to Waterfront Seattle.