UMC brings on new president, looks forward to the next 100 years 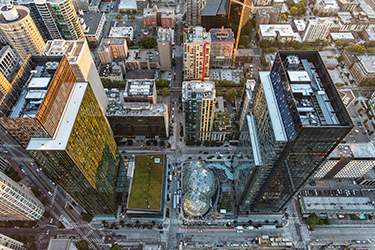 Jerry Bush last month shed his role as president of UMC as part of a succession plan put into play nearly a decade ago that calls for longtime employee Steve Brooks to take over.

Bush was the mechanical contractor's president and CEO for 20 years, and is continuing as CEO through the end of the year. After that, he will stay on to help the century-old company with strategic projects and initiatives.

“To ensure a smooth transition of leadership, we are separating the president and CEO roles to allow Steve and I to generate a collective impact in internal operations and business development across the market,” Bush said in a prepared statement. “During this period, having two leaders who complement each other in terms of strengths, skills and experience will benefit the long-term strategic goals of the company.”

Brooks is a professional mechanical engineer who has been with the company for 22 years — the last four years as vice president of business development. He has held leadership roles in several different divisions of the company, including engineering, special projects, major projects, industrial and virtual construction/BIM.

In 2012, he became a shareholder of the Mukilteo-based business, which is owned by seven employees.

“We are a people centric business,” Brooks wrote in an email. “Most of the work we do requires the skills of craft people. It takes time to learn the business and we have been successful finding and retaining talent by showing them many ways to create a career at UMC.

“I've worked in five different divisions of the company. It's allowed me to see what I'm passionate and most successful at to match my skills to the needs of the organization. That said, we have also been fortunate to attract talented people to UMC that help bring a new perspective to ensure we are always looking to improve our experience for our team and our customers.”

Over the past five years, Brooks has contributed to the company's strategic plan by growing the sales team with staff focused on better customer experiences.

“Going forward, there will be minor adjustments made to better position the business,” Brooks wrote. “Like Jerry said, we are expanding key parts of our business to make us more resilient and relevant. Construction is changing rapidly and we have a team looking at taking the skills we have and applying them in new places. No major changes in what we do, however we might be doing the things we are good at in non-traditional ways, which might feel quite different.”

Bush joined UMC in 1989 and worked his way up through the ranks as project manager, construction manager and operations manager. He became president and CEO in 2001, the same year the company moved from Seattle to Mukilteo. Bush said they had to move in 2001 because both office and manufacturing space was tight. Offices in the old location spilled over into conference rooms and even into a former restroom.

Bush would later lead the company through 9/11, the Great Recession and today's pandemic.

Bush said the pandemic has been especially hard on the company. “We have a well-crafted, nurtured culture that relies on personal connection,” he wrote in an email.

“UMC is as healthy an organization as we have ever been,” Brooks said in a prepared statement. “Jerry led the charge to create the UMC we know today by enhancing the UMC experience, both internally for our employees and externally to our clients. Through his leadership, we went into our second century of business more strategic and resilient, and on a path to continued growth. My goal is to make UMC even better for the future.”

UMC has about 400 employees and does about $150 million in annual volume.

Notable projects include Amazon's Seattle campus (Day 1 and Doppler buildings and the now-famous Spheres), Army Corps of Engineers' Federal Center South headquarters and the Swedish Issaquah hospital (winner of the 2011 DJC Building of the Year award).

For the Amazon project, UMC helped design and build a central plant in the Doppler Building that not only provides heating and cooling for that building, but also for up to seven more blocks of the campus by tapping waste heat from an adjacent data center. It was the city's first large-scale district energy system.